Art Ops #2 - Riot In Suburbia: Part Two of How To Start A Riot

There's no preparing you for the glorious wonders contained within this series.

The other day someone saw a copy of ART OPS #1 on my desk and asked what it was about. I realized, trying to explain this series isn't the easiest thing. We have a world where figures and things in works of art can be removed or stolen and given life. There's a secret police force, the Art Ops, that polices the art to keep everything safe and in line. When all but one member, the Body, disappeared last issue, it's become a sticky situation for the remaining agent.

We were introduced to Reggie Riot in the first issue. His mother was in charge of the Art Ops and he wants nothing to do with his mother or her life. Unfortunately for him, recent events have pulled him into an active role (watching over the actual Mona Lisa who has been taken out of her painting for her protection).

For me, I would read anything with art by Mike Allred and Matt Brundage and colors by Laura Allred. It was a great surprise when I found myself blown away by the story in these two issues. Shaun Simon is giving us an insanely trippy world. I didn't think things could get even more freaky and delicious than the first issue.

You'll be in awe over the story. Reggie is not one to be put in charge of anything. You know only bad things can happen. If things weren't great enough, we're also introduced to another character, Isabella, that you'll immediately find yourself falling for.

ART OPS has skyrocketed to the top of my reading list. It's easily become one of my favorite series to read. I'm having to restrain myself from gushing on and on about how much I love the story and art. Shaun Simon, Mike Allred, Matt Brundage, and Laura Allred are creating something truly wonderful with this book. Set in a world where art can come alive, I find myself almost wishing I could go into this world just to take in all the splendor. There's a strange mix going in the story. I have no idea what's going to happen and I absolutely love that. Each issue has been like a treat or reward. You really need to do yourself a favor and get on board with this series. It's not like anything else out there. I just can't get enough. 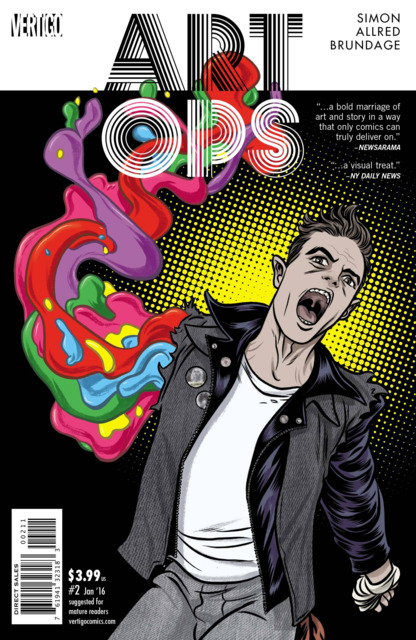