Count Vertigo returns and a decision is reached in Moira's trial.

Last week, Arrow escaped all of the madness in Starling City and gave us a little vacation as we went to Russia (well, it wasn't really a good time for Diggle, but I digress). This week, however, "State vs. Queen" dives back into all of the chaos taking place in Oliver's city and brings Moira's trial to an end.

I'm by no means cold hearted, but it was tough to feel any degree of tension with Moira's court scenes as they progressed. Worst case scenario: she's given the death penalty and she'd understand why and accept it. We'd see how this takes a negative toll on the family and we'd be treated to more CW-esque drama as a result. Thankfully, there's a big reveal with her conclusion. This is spoiler-free review and all that jazz, but I will say I was pleasantly surprised with the road they've decided to take and the sky's the limit with this one. Whether she's free or sentenced to death, they've used the case to bring about a much more interesting narrative.

To be totally honest, I've never really been a fan of Arrow's take on Count Vertigo. The fiend always came off a bit too over the top for me and it's tough to keep up the illusion that it's an actual bad guy instead of actor having a lot of fun with the role. It doesn't help that this episode drew some noticeable connections to Joker in The Dark Knight. Yes, their mentalities and goals are completely different, but their actions can draw some pretty strong parallels. That said, I will admit that I loved the conclusion with the villain. It was frustrated to think of all the opportunities Oliver had to take a shot with his lightning quick reflexes and accuracy, but still, it was very well executed (unintentional pun is unintentional). Without spoiling anything, let's just say it puts Oliver's new morals to the test and, given all of the factors surrounding him, it's an appropriate conclusion.

Roy and Thea have a solid moment and it helps me forget how unlikable she was last week. It's great to see Roy be a hero (so to speak) and truly step up and help her through this terrible time. Additionally, I really appreciate the way the writers decided to follow-up on the Felicity/Oliver connection which was finally brought front and center in the last episode. It's not blatantly thrown out there or randomly brought up -- the moment is fitting after everything that went down and his actions further support how much he really cares for her.

This episode's all about the final quarter or so because, man, it's loaded with reveals and it's all handled quite well. Seriously, they pretty much cover anything and everything they can in this one either towards end or with easter eggs throughout the episode (a tease for Barry Allen is blatantly thrown in there). Sure, I wasn't feeling much of the Vertigo and Moira plot, but I'd say the last few acts make up for it and warrant "State vs. Queen" a bump to 4-stars instead of 3. It ends on a mighty fine note and, if you've been digging this show (and you are if you're reading this, right?), it's sure to have you excited for next Wednesday. Oh, and the island story? It's about to get VERY interesting. 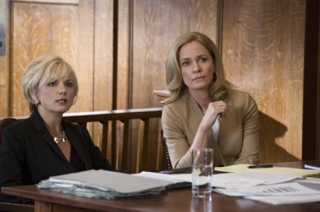