Diggle, Oliver and Felicity head to Russia and we finally see the return of Deadshot. Will Diggle finally be able to confront the assassin?

Diggle's desire to finally get his hands around Deadshot's neck lands his close friend, Lyla Michaels, in trouble. And when I say "in trouble," I mean trapped in a high security and super shady prison over in Russia. Diggle wants to head to the nation to save the day, but seeing as he always has Oliver's back, it's only fair Ollie gets his back this time around, right?

Good news: Summer Glau finally gets the opportunity to do more than offer a blank stare. It takes some vodka to let her character show some personality, but the scenes work well, revealing she and Ollie have more in common than they may think. And while Ollie has a big secret she apparently doesn't know, could the same be true for her? It's certainly a possibility based on the comic character she's inspired by.

Look, the tension between Felicity and Ollie has been obvious for ages now. Whether you like the idea or not, it was clearly inevitable the attraction between them would eventually come front and center. Without giving anything away, let's just say Isabel's actions cause the two to finally express their feelings on the subject -- even if it's oh-so-brief. The CW absolutely has its share of silly drama and love stories, but the final moment between them actually felt legitimate.

Speaking of relationships, Thea's been pretty cool this season, but her decision with Roy in this episode was a frustrating one. And, when it seems like she'll finally justify her actions in the end, she totally dodges the question and just says the obvious. Seeing as her and Roy have developed a strong bond, you'd imagine she would try to talk it out with him or attempt to tell him the truth instead of blatantly hitting him with the polar opposite. I get we're not perfect and we all make mistakes -- especially under these circumstances -- but damn, that was abrupt.

Diggle's story with Deadshot presumably reaches a conclusion, but when one door closes, another one opens, yes? Arrow has been doing a stellar job not only hitting us with references, but providing the basic building blocks for them as well. They aren't references just to appeal to the comic fans, either -- they're actually following-up on these and the potential's massive with each one. This holds especially true with what's going on with Oliver in the past and how it's certain to impact Slade in due time. At this rate, it definitely looks like we'll see the real Deathstroke soon enough. Could he maybe even end up on Waller's Suicide Squad? A man can dream, right?

Diggle's search for Deadshot has been a long and painful one. I understand the logic behind his actions when he finally meets Floyd and how he did what needed to be done, but considering all the history between them, it seemed like an underrreaction on his part which took an uncanny amount of willpower. I mean, the poor guy's wanted Floyd's blood for quite some time and ultimately he doesn't even lay a finger on him. I'm not saying hitting Floyd in the face would be proper closure, but the guy's earned it, no?

"Keep Your Enemies Closer" is all about the build-up. The writers are throwing plenty of new elements and references our way and it's looking like each of these will eventually spawn their own plot points. It's awesome to think of where this will all go and, I may be alone here, but I'm glad they're finally tackling the blatant attraction between Felicity/Oliver. But, considering all of the hype behind the Diggle/Deadshot feud since Season One, I can't help but feel somewhat letdown by its conclusion. This wasn't a bad episode, but it's not even close to touching the sheer quality behind last week's episode ("League of Assassins") which, in my opinion, was absolutely the best from the show yet.

Viners, what do you think about "Keep Your Enemies Closer?" Let us know below or go the extra mile and write your own review! 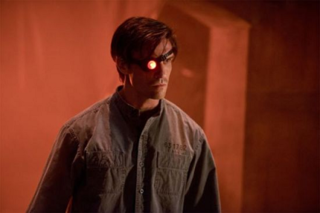