Spyder-Man races for his life and Baron Tony Stark dreams of his brother.

Right off the bat, with ARMOR WARS #1, readers are treated to a pretty awesome scene of Spyder-Man on the run with a few other armored men chasing him down. It's a great way to kick off the issue and writer John Robinson, along with artist Marcio Takara and colorist Esther Sanz really do a fantastic job and grabbing the reader and introducing them to this part of Battleworld.

That opening scene really comes back to haunt the reader at the end of the issue as well, with one great splash page, which will make readers want to push forward to find the answer to the question posed here. No spoilers though.

This is a different Tony Stark than readers a familiar with, much like the vast majority of character re-imagined for SECRET WARS. He's a man whose tech is everywhere and he's in control. He's haunted by the past of his brother, Arno.

Overall, this issue really does have a great "What If" feel to it and what's a tad more satisfying is that the first issue isn't directly tied into the rest of Battleworld. Robinson spends time developing the world Baron Tony Stark lives in. Yes, Stark works for Doom, but aside from that piece of dialogue, it stands on it's own.

One of the problems I had with the #1/2 issue continues here. The colors, in scenes where someone is in an armor costume looks really cool, there's a certain way Esther Sanz colors these suits which give them this hard and grittier edge, but then when it comes to skin tones, it pops way too much. The contrast between the two styles is a bit jolting. In addition, sometimes Marcio Takara's art really hits the spot and during some scenes, it feels a little muddied. There's quite a few times, during smaller panels, where the expression on the character's face is hard to read and the reader will lose the emotion in the scene a bit.

ARMOR WARS was a solid opening but not without its bumps in the road. It feels more like a What If story over anything else, which is really cool, but it does drag a bit because of some heavy dialogue that is mainly all about setting up this world's Tony Stark. At the same time, there's some hiccups in the art and the color work is decent, but the armor coloring and the facial coloring are too contrasting here. The last page will make you want to keep reading, so this gets a mild recommendation. It's pretty fun and there is a lot of potential here. 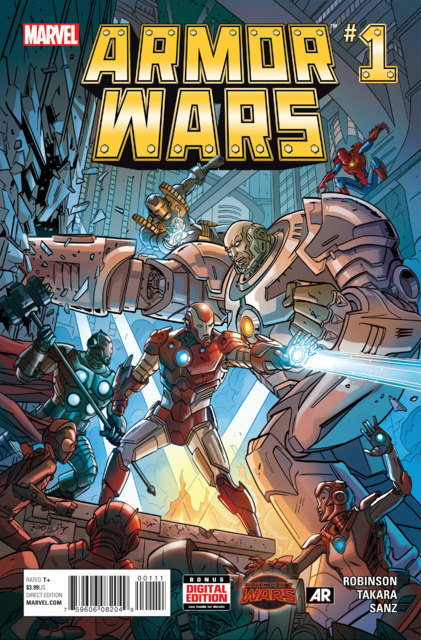