Mexico City has been destroyed and Generation Zero has gone to the scene to help the survivors.

Writer Joshua Dysart has been doing some topnotch work with Valiant's psiots. Over the past couple of years, he's filled the universe with rich and legitimately fascinating characters. Now, he's presented with the opportunity to throw some of them into the publisher's latest big event and the experience does not disappoint.

First and foremost, artist Robert Gill and colorist Romulo Fajardo Jr. do an exceptional job with the dark, depressing, and frightening atmosphere. We're talking about a city that has been absolutely devastated and the way they present it in the panels makes you understand the massive tragedy that has occurred and how horrifying it must be for the people trapped in the region. From dogs feeding on corpses to destroyed buildings being engulfed in flames, this issue gives you a shockingly effective look at the impact of the Armor Hunters' action. Thankfully, Animalia makes her presence known and the two are able to create her cartoon forms well. The contrast of seeing such a fun and animated being slaughter a criminal is an image you won't forget any time soon. On top of that, they do a terrific job making sure the panels serve as a great compliment to Dysart's script. This is more than clear with the execution of the opening scene.

As for the writing, Dysart once again manages to create a character-driven issue that's also full of spectacle and intrigue. Being so new reader friendly is a bit of a double-edged sword, though. On one hand, Dysart does a fine job introducing all of the characters and setting the stage without making blatant recaps feel redundant. We get a proper read on who's who, see what they're capable of, and he definitely leaves us wanting to see more of these character dynamics. And, even though the tone is overwhelming dark and bleak, we're still given a good laugh (thanks to Faith). On the other hand, it does come off as a bit of "set-up" issue. Like I said, he handles it well, but the fact he needs to basically go down a check list and make sure everyone's in the loop with everything becomes a little noticeable. Still, it doesn't hinder the experience all that much and, even though we're covering material in the big event that's already been addressed, he finds a way to show it in a whole new and memorable perspective.

Gill and Fajardo Jr's presentation of the chaos and landscape is praiseworthy. They finds ways to bring us right into this atrocious scenario and get a good look at just how terrible the situation has become. However, the character work tends to fluctuate and that was a little distracting at times. Shots of groups that aren't up close came off as somewhat rigid and the line work on faces -- as well as some expressions -- occasionally seemed exaggerated.

Minor gripe: it's pretty odd the news would totally gloss over the fact there's giant alien hounds attacking random cities. It's just kind of casually mentioned and then they go back to talking about what has happened to Mexico City. I get it's local news and that's a HUGE deal, but you'd think an invasion of frightening space dogs would be worth talking about just a little bit more, too.

Is this mandatory reading if you're a big fan of ARMOR HUNTERS? Honestly, it doesn't seem like it. It doesn't appear likely the plot reveal any major developments about the overall event. But you know what? That's okay because, as a fan of HARBINGER, Dysart aims to show us how these deep characters are reacting as they're presented with such a shocking scene in Mexico City's remains. We've only seen Faith and Torque from the Renegades, but seeing as that team's received so much attention, it's nice getting a better look at Generation Zero. On top of that, it reveals that yes, this is a universe where there are real consequences. Destroying a massive city isn't something that should be used for shock value and then be totally forgotten. A huge space battle with aliens doesn't just come and go, either. We get to witness what this means not just for the city, but for the country as a whole. ARMOR HUNTERS: HARBINGER #1 has a whole lot of characters, yet they're still able to make it new reader friendly (something Valiant continues to impress with) and strike us with a haunting, emotional, and character-driven opening chapter. It certainly feels like an introductory and buildup issue, but now that all of the pieces are apparently in place, things are sure to get even more interesting. Needless to say, this is worthy of your attention if you've been interested in Valiant's psiots. 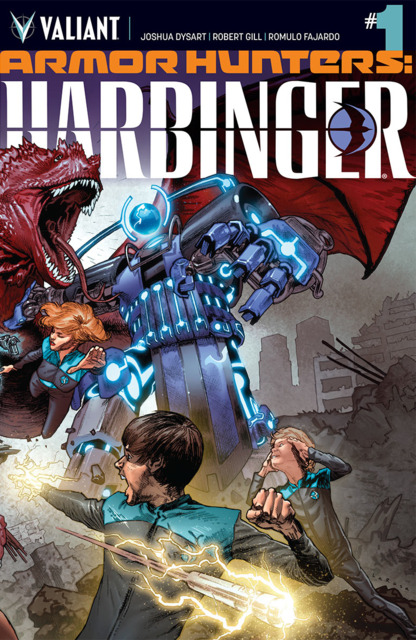