Mexico City is gone and Aric has a tough decision to make. Also, Aric pets some "space doggies," with his feet to their faces.

With the big bang that happened in the last issue, you better believe that ARMOR HUNTERS #2 is going to be filled with a lot of people staring at television screens, with stunned looks on their faces. Issue #1 kicked things into high gear and issue #2 has everyone standing around, regrouping. Some folks may find the second issue a tad boring, but realistically, it flows incredibly well. Writer Robert Venditti does a stellar job playing with the idea of action and reaction with these characters. They're (for the most part) smart characters and not just going to run all "willy-nilly" into battle. They have to plan a bit and move strategically.

Because of the revelations of X-O MANOWAR #26 (Primary Reebo and Malgam used to work together), it is hard to see what the government is doing to Malgam, who thinks he needs the armor to live. In fact, things almost go too far here, and although Malgam is technically wearing half a piece of armor, those scenes are tough to watch. Again, this all builds on Malgam's previous relationships, which makes the full story that much more sweet.

Venditti brings back some brutal action sequences to Aric, even though this isn't X-O MANOWAR. You could say one thing that really stands out with Venditti's writing is that their character comes out in their fighting, and here, Aric doesn't hold back. He's, quite literally, tearing apart heads and also jumping on them in the fight sequences, later in the issue. The brutality isn't what makes the scenes great though. It's that the character committing these almost heinous acts would do things like this without the armor. It says a lot about his character and where he comes from. Aric is a warrior.

Artist Doug Braithwaite and colorist Laura Martin provide some compelling visual storytelling in this issue. Braithwaite's panel layouts and overall page compsitions are incredibly fresh on every page. Braithwaite does some great work with facial expressions, especially the moment where Malgam is in extreme pain. You can just see the terror shoot across his face. It's awesome stuff. Martin does stand-out color work on this book. Everything pops in this issue, but it never looks cartoonish or childish.

The idea of Bloodshot being a part of this makes the story lose a bit of its flavor. When Eternal Warrior or Ninjak come over, it makes sense because there is a lot of history between those characters and Aric, but Bloodshot is through in because "we need all the balls to the wall we can muster right now." That little line of dialogue is hard to swallow. Maybe it's just my hatred for the overall character, as I find him one dimensional.

Because this issue jumps back to Malgam, from an earlier issue of X-O MANOWAR, readers may find some of the things going on here pretty surface and flat. You need to read X-O MANOWAR (especially #26) to get a fuller picture for this story.

ARMOR HUNTERS is a blast to read. It's an event that lives up to the hype. While there are some problems with having to know what's going on in X-O MANOWAR to get a full picture, and the fact I'm just not a fan of who showed up into this issue, everything else about this series is a ton of fun and moves along naturally. Venditti is really making this event feel smooth and not all hurky-jerky. This is a series readers should check out. Valiant is doing events the right way. 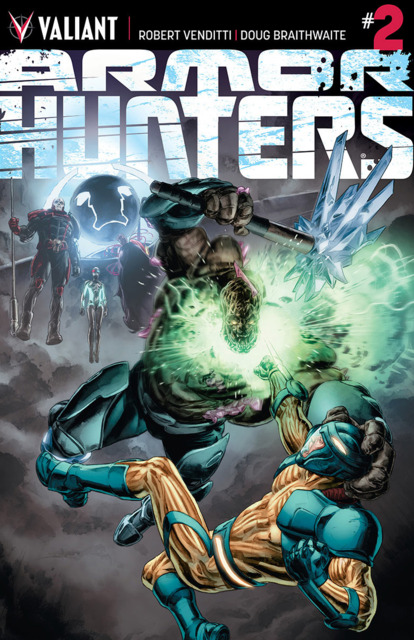