Arkham Manor #2 - A Home for the Criminally Insane, Chapter Two

Arkham Asylum is in a new location. There's a murder mystery inside. It's up to Batman to go undercover inside to figure it all out.

Arkham Asylum is gone. That just seems so wrong. Now the facilities have moved to Wayne Manor? That's crazy. But you know what? It's making a heck of a story here.

Gerry Duggan is giving us a different kind of Arkham story. Over the years, we've seen different stories take place in the Asylum. It almost feels like the place was constantly going through changes. When I heard the asylum was moving to Wayne Manor, I felt like it was simply an imaginary or Elseworlds story. With two issues out, you can see how it makes some sense. Batman now has a bit of an edge in keeping track of what's going on. We've seen, recently, that there were all sorts of secret passages and underground cities associated with Arkham Asylum. It was starting to get to be too much to keep straight. The recent events in BATMAN ETERNAL have lead to Arkham moving to its new location and it's like we have a whole new angle on what could be done with Batman's rogues.

As we're adjusting to this change, we also have a murder mystery occurring within the Manor. This has lead to Batman creating a new undercover guise to try to figure out what's going on. With a story focused on the inside of the Asylum/Manor, we're getting a different look at the criminal element in Gotham. Instead of a story here or there, we get to see more of the every day happenings inside. Group therapy sessions? I never would've imagined that would be possible. Batman is also on slightly different grounds despite the fact he knows the facilities. Having to act under this new guise is making Batman operate with different tactics.

Shawn Crystal's art is pretty groovy here. He has a way of creating and establishing a different kind of vibe in the story. You really get a dark and gritty feel that makes you happy you don't have to go anywhere near the place.

We have an interesting set up. Batman wanting to go inside to solve the murder mystery gives a different and more hands on approach. It does seem a little strange that he would have to fully put himself inside though. I was under the impression he would have cameras and mics all over the place. Batman wouldn't concern himself with matters of privacy.

There's also the matter of Eric Border's small appearance here, given what we know about him now in BATMAN #36. His reaction to a phone call was odd but I'm sure we'll see more soon.

This isn't a regular Batman comic. That's a great thing. Gerry Duggan and DC are taking what we know of Arkham Asylum and reinventing it. It might seem a little hard to accept but it has opened the door for a new direction with the concept. Batman might have an advantage with the facilities now located at Wayne Manor but placing himself inside, undercover, to solve a murder is exposing him to plenty of risks. Shawn Crystal's art is creating the right atmosphere for this series. I'm not sure where this series is going to go but I can't wait to watch it all happen. 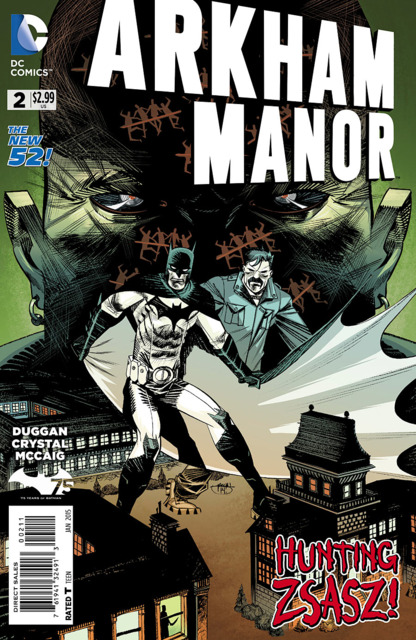