Aquaman #40 - Maelstrom VI: The Edge of the World

It's the finale of Maelstrom!

Everyone has to take on Karaku, the gigantic, firey god of the island and lives are sacrificed to do so. Arthur and Mera desperately try to convince Atlanna that Arthur is her son. Will she listen or battle to protect her people from the "Atlantian oppressors?"

There's been a lot of build-up for this story and it's something fans have wanted to see ever since it was revealed that Arthur's mother was still alive, which actually wasn't that long ago. What writer Jeff Parker delivers is a satisfying story and conclusion. It didn't blow me out of the water (no pun intended and also, see below) but it is, in the long run of Aquaman stories, one of the better ones. Believe it or not, Aquaman has had a lot of great stories too.

Parker leaves readers with a pretty awesome fight against essentially a god made of lava, continuing on the with tradition of "Aquaman is going to fight something giant" that Parker delightfully plays with here. It's fun and thrilling and there's real world consequences to this battle. It's a great mixture of Silver Age and contemporary action sequencing. In addition, Mera is pretty freaking awesome during these scene. She really lets loose with her powers and it's pretty easy to say that she's quite a bit more powerful than her husband.

As expected, the art of Paul Pelletier is fantastic and it's going to be a bummer not seeing his name attached to this book anymore. Pelletier is joined by Sandra Hope, Wayne Faucher, & Tony Kordos on inks and Rain Beredo on colors. Beredo does some great work on the colors here and the book really pops with Rain's work. In the Karaku alone, there's a lot of variation within the reds and oranges that really make the creature jump off the page. While Pelletier's work is always top notch, I really appreciate the "Vuu Vuu Vuus" all over this book. Great art and great vuus. What more could you want?

If only this story had one more part! Everything wraps up really quick and there's no time to fully resolve everything, but this problem is not on the creators at all. They had to wrap everything up before CONVERGENCE, so they did what they had to do with the time they got. However, I really would have liked to see the relationship with Atlanna and Aquaman explored a little bit more, but the only way to do that is to make this a super-sized issue.

It's a little bit of a bummer to see Pelletier, Beredo, and Parker leave this book, especially when this last arc was such a fun ride and the best arc from Parker's tenure on the series. While there are some issues with the pacing of the overall story, that's more on the fact that CONVERGENCE is making everything come to a grinding halt. Maelstrom really could have used another issue. However, for what it was, this was a great story and added a lot to the mythos of the character. I highly recommend checking this issue and storyline out. 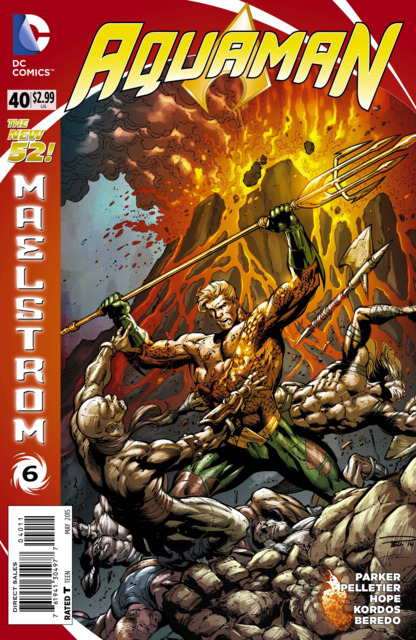