Aquaman and Swamp Thing battle it out while Mera figures out who is trying to kill her.

In the past few issues, Mera has really become the star of this book. Her story continues here as she heads to a place called "The Underrealm," an area farther and deeper from where Mera is from. It's cool to see that Atlantis is much larger than most have thought before. There are sections of this empire that are their own subculture, and within one of those areas is The Underrealm, which don't take kindly to strangers. Mera and her companions are the coolest part of this book. It truly feels like a great adventure story with a dash of mystery thrown in there.

On the surface, Aquaman is with Ya'Wara looking for Swamp Thing. It cuts to one of the silliest things in this issue, and I mean that in the best way possible, which is a couple of cryptozoologists, complete with guns and a video camera, searching for the legendary Swamp Ape. It's silly and a bit of good fun, and all of that leads to a back and forth battle between Swamp Thing and Aquaman. "Fun" is the keyword here as these two super-heroes battle it out and readers get a full-scope of just how powerful Swamp Thing can actually be.

The final couple of pages bring us back to the Triton Base and we learn that Aquaman hasn't seen the last of Coombs. This is a pretty cool moment that really pushes the story Parker put into motion at the beginning of his run.

Art duties are split between Paul Pelletier and Alvaro Martinez and the transition is smooth and seamless. Both of these artists are incredibly talented and the actual art-switch is not distracting. While it would be great to have Pelletier doing full issues again, Martinez is a welcomed addition to this series.

Why is Aquaman going after Swamp Thing? Because Swamp Thing put algae in the sea? It's a bit of a loss why Aquaman would travel so far and just duke it out with him. Sure, the fight is fun, but the reasoning behind feels weaker than it really should. This book comes off more as "let's have these guys fight for fun" than anything else.

AQUAMAN continues to be a pretty fun book. However, the real highlight of this issue is Mera's story as she tries to find out who is killing her. While the Swamp Thing and Aquaman battle is pretty pleasing to read, it feels like the reason for it happening is pretty weak and not well explained. AQUAMAN is still worth your time and money as Parker continues his run though. Overall, I recommend this issue. 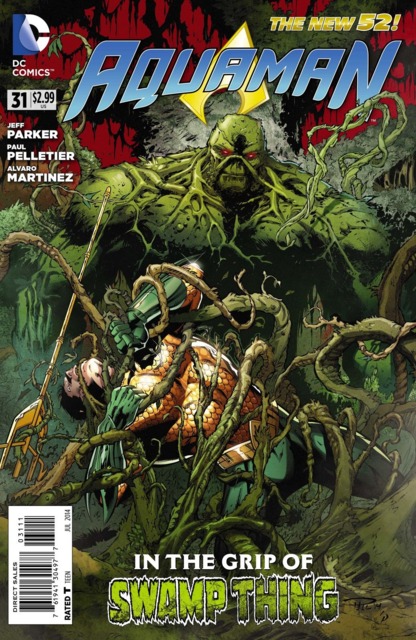