What happened to Orm after he escaped Belle Reve, during the break out?

Orm has escaped from Belle Reve and is on his way to where he belongs, the ocean because the true leader of Atlantis has no need for the Crime Syndicate.

A few of the Villains Month books have gone the route of "what was this villain doing during the Crime Syndicate invasion," and it's been a bit of a mixed bag. Out of most of the books that used this tactic, this and The Rouges were the best. This issue was not really about Orm's reaction to the Crime Syndicate, but more about his journey home and defining what type of "person" (Atlantian) he is.

Writer Tony Bedard takes the reader on Orm's journey back to the ocean, and we all get to see that Orm isn't a monstrous villain. He's protective of himself, his ocean, and his people. This is Geoff Johns explored a bit in the main AQUAMAN series, but this whole issue is dedicated to that. While it's true that Orm does a few things that many would consider dastardly, he justifies it in a way that makes sense and makes the reader think "oh, he's not all that bad." Bedard does a fine job with the dialogue in these scene to convey that message to the reader.

The art team of Geraldo Borges (pencils), Ruy Jose (inks), and Rod Reis (colors) does a fantastic job here not only with the art itself but by making this feel like it fits in directly with the main AQUAMAN series. Most of the "props" for making this book feel like that need to go to Rod Reis, who is the colorist on the main series. Borges has a similar style to Paul Pelletier's, which helps the transition out as well. That's a place where many of these books dropped the ball a bit. It doesn't feel like part of the main series.

Orm's Atlantian outfit is amazing. He looks incredibly stoic and so cool. Hopefully, he keeps the helmet off because it's a tad silly. Overall, he's one of the best designed characters because the outfit he's wearing matches the world that he comes from and it says so much about his personality.

There were a lot of high expectations for this particular issue because Orm AKA Ocean Master has been the stand-out villain in the new AQUAMAN series. The book delivers pretty well, but it just wasn't as awesome as I hoped for.

AQUAMAN #23.2 OCEAN MASTER is an incredibly fun issue that takes a look at who Orm is and what makes him tick. While some of this stuff may be repetitive to long-time AQUAMAN readers, it is a great read for fans and newbies alike, which is a breath of fresh air, especially to people chomping at the bit to jump onto this series. The best part of the issue is that is really feels like a part of the main series, as far as the art and writing go, even though it had a new creative team, minus Rod Reis, on the issue. Overall, this was a great read, and it gets a high recommendation. 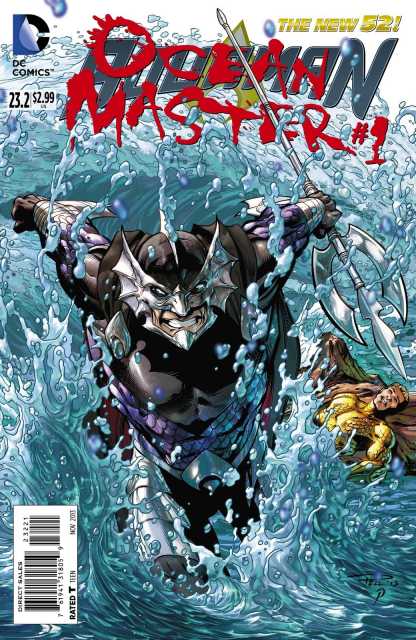