Ant-Man faces perhaps his biggest challenge yet…trying to get a loan from the bank.

Scott Lang is trying to figure out his place in the world. Despite his successes as an Avenger or a member of the Future Foundation, that just doesn’t translate into a steady income. With his daughter Cassie back (now living in Miami with her mom), Scott Lang is desperate to find a way to earn a living and be part of her life. But how desperate is he?

Nick Spencer does a fantastic job in showing the human side of Scott Lang. Who would have thought that an interview for a bank loan could be so exciting. Of course, given Lang’s luck, it’s no surprise when events start to go in a different direction. One would think one of the hardest parts in making an Ant-Man series work is coming up with credible and interesting fight scenes. Spencer has no problem with that here. With a new member added to the supporting cast, you can't help but smile when thinking about where things can go from here.

Ramon Rosanas' art and Jordan Boyd's colors look really good. There's a mix of action scenes and ones where Scott is simply having conversations. At no point do you feel the pacing slow down. The entire creative team is carving out a new corner in the Marvel Universe and it's looking really good.

With this being the second issue, it's clear there is still some world building going on as Scott Lang is adjusting to a new city. We don't have a huge nemesis here for Ant-Man to face but that's okay. Hopefully we'll also see more of the relationship between Scott and Cassie fleshed out, to find out more of her current state. In these past two issues, it's pretty much been limited to just talking on the streets for the most part.

Ant-Man may be a small hero but this book is showing he has a big heart. Scott Lang has been around for some time now but Nick Spencer is really shaping him up in a new town with a new mission in a great way. It's clear you can't be too sure what to expect in this series. Ramon Rosanas and Jordan Boyd's art and color gives the book a really nice and different feel from the average Marvel book. Don't let this book slip past you. 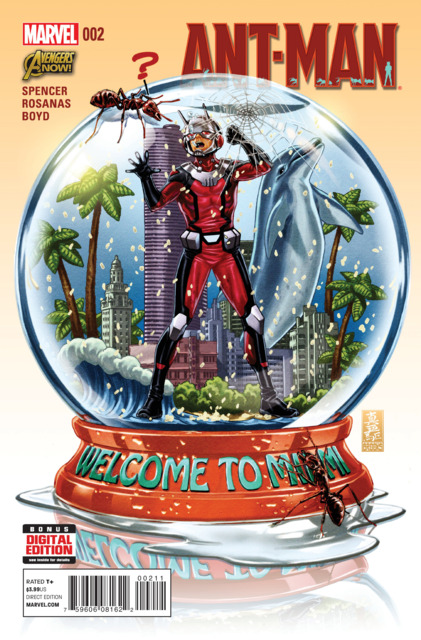