Angela has incurred the wrath of Asgard in her latest decision. Was there any other way this could play out?

Angela is becoming a more and more complex and interesting character in the Marvel Universe. While I did read the series in which she debuted years ago, I can barely recall any real depth or character given to her. Now that it’s been revealed what her true heritage is and with her own series, Kieron Gillen and Marguerite Bennett are exploring the possibilities of who she is and what she’s really about.

The first issue showed Angela on the run. It turns out she took something from Asgard that could only lead to a massive pursuit. With the revelation at the end of the first issue, we do journey back a little to the moments prior to her big departure from Asgard. As the action and pursuit kick into gear, we also get to find out more about what makes Angela who she is.

The art and colors really fits the majestic feel of the story. Phil Jimenez handles the art in the main part of the story. There's plenty of action and the detail is superb. Romulo Fajardo's color sets the perfect tone for the art and situations. Stephanie Hans' art for the real flashback scenes has a cool feel to it as well. Normally I get bothered by different artists in the same book but the distinction between current events and the past is clear.

The flashback part where we find out more about Angela's character and integrity is great but does feel a little out of place. The situation that brought it up and how long the telling is feels slightly intrusive to the main story. It's no wonder their pursuers were able to catch up to them after a five-page telling of Angela's relationship and time with the Angels.

We still don't know exactly why Angela decided to take the baby. It's also surprising that the baby hasn't cried or wanted to be fed but that could just be due to Asgardian physiology.

ANGELA: ASGARD'S ASSASSIN is shaping up to be a book full of action and characterization. We're finding out more about the potential of Angela's character and what she's all about. Kieron Gillen is crafting a fun and exciting tale with Angela going up against certain Asgardians and the flashback sequences by Gillen and Bennett add even more to who Angela is. While the flashback is informative, it did feel a little out of place in the time and moment it was told. If you've been craving some good old fashioned and bombastic action and storytelling, you need to check out what ANGELA is all about. 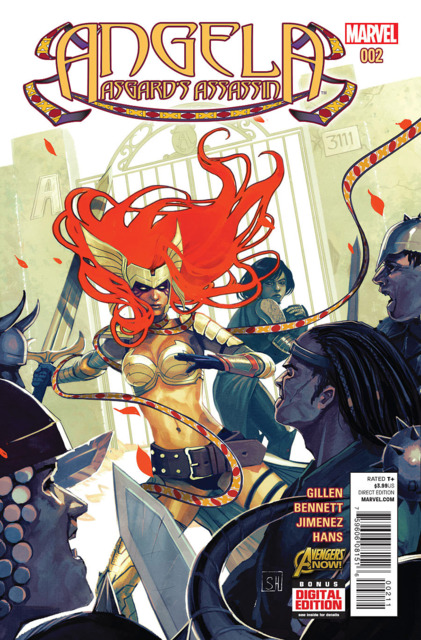