Angela may know her true past now but that won't stop her from her current mission.

Angela's always been a fascinating character despite the fact we didn't know too much about her. When she first debuted (at another publisher), she showed us she could easily take on an extremely powerful opponent. In the pages of GUARDIANS OF THE GALAXY, we saw more of the same. We didn't know who Angela was until the THOR & LOKI: THE TENTH REALM issues of Original Sin.

We join the story, already in progress. Angela is on some sort of mission carrying something wrapped up. We immediately see how much respect she commands from those she encounters but soon finds she's been followed after meeting up with an old acquaintance. Because Angela is out to protect her friend and complete whatever her mission might be, that means we get to see her in action.

If you're familiar with Phil Jimenez's art, you have an idea what to expect. Despite being a scantily clad character, Jimenez's art makes you appreciate what a formidable fighter Angela is. Seeing her cut loose is pretty great. To mix it up a little, we also get some flashback art by Stephanie Hans which fills us in on more of the story. Normally I'm against multiple artists in the same issue but it works here.

What fascinates me about this story is we know it's rooted in the Marvel Universe but it also has its own separate feel. It isn't until a bombshell is dropped at the end that we start to see some of the bigger puzzle pieces fit together. That page, you'll know which one I'm talking about, is enough to make you stop in awe. Just seeing where this will go will make you salivate for the next issue.

I've grown used to it but I was never a fan of the bikini-warrior look. It's part of who she is and I'm sure there's some that like it. Just as we've seen Red Sonja change up her outfit from time to time, it would be nice to see Angela change her wardrobe sometime. You do have to wonder where she gets such a big belt.

There is a lot of exposition, especially in the beginning. It is important for new and old readers to understand where she's coming from but it felt a little too much.

You might want to go back and re-read the issue once you see the big reveal in what Angela is doing here and who she's up against. Not knowing what her mission is can add some mystery and intrigue to the story but it also makes you feel like you're in the dark.

I was excited for this book but didn't realize how excited I was until I started reading it. Regardless of how much you know about Angela before this issue or before she came to the Marvel Universe, you'll gain an appreciation for who she is and what she can do. Thanks to Kieron Gillen and Marguerite Bennett, we get a great sense of her character and what makes her who she is. The art in the main story by Phil Jimenez and the flashback art by Stephanie Hans will knock your socks off. If you're not wearing socks, maybe you should put some on before reading the issue. If you're wondering whether or not to add this series to your pull list, just stop and add it already. 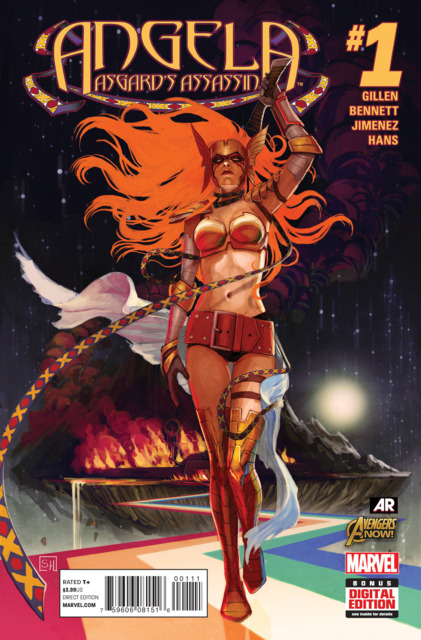