Find out the secrets of the Miner's Journal in this half comic/half prose issue.

Get ready to do some reading. Scott Snyder gives us something a little different. Rather than your typical comic, he decided to flex his writing muscles a little further. With an issue half comic and half prose, we're treated to a pretty in depth story.

The issue starts out with an agent of the Vassals of the Morningstar. His job was to look over and assess books when he discovered an old journal. At first he assumed it was just another book. Upon further inspection, it lead him on a mission to find an old mining camp site based on the writing in the journal. The issue alternates between the current time and the text from the journal (there are some sketches in the pages of the journal).

The story will suck you in. As when you read a novel, your imagination kicks in and you can visualize the story in your mind. When the miner and his friend arrived at the campsite, it seemed there was something odd happening. We get to encounter the feelings and events as they are written in the journal. This adds to the tension of the story. You know something bad has to be coming up (this is Scott Snyder writing after all).

In another change, the art is by Matias Bergara with color by Dave McCaig. The scenes in the day look pretty amazing. They take place in the desert and it's a little strange to see such brightly lit panels in an AMERICAN VAMPIRE comics. The accompanying art within the journal pages looks great as well. A big round of applause to Steve Wands if he's the one that lettered all the journal pages. I hope he got paid more than the normal rate.

There's just a couple minor problems. There's been a slight delay since the last issue. Snyder has commented on this because he decided to do the prose in this issue. The other thing is this issue doesn't pick up where issue #4 left off. It's a fantastic story here that had me glued but I've also been waiting to see what happens next for Pearl and Skinner.

Don't you hate it when you get a comic and you zip right through it? That won't be the case here. Scott Snyder decided he had so much story to tell, half of the issue is in prose. Detailing pages from an old miner's journal, we get a vivid description of past events tied to the current timeline and get to actually use our imagination in visualizing the creepy events going on. There is some great art by Matias Bergara with color by Dave McCaig. This issue might not pick up directly from the previous but it's an incredibly ambitious installment and you more than get your money's worth in terms of story. 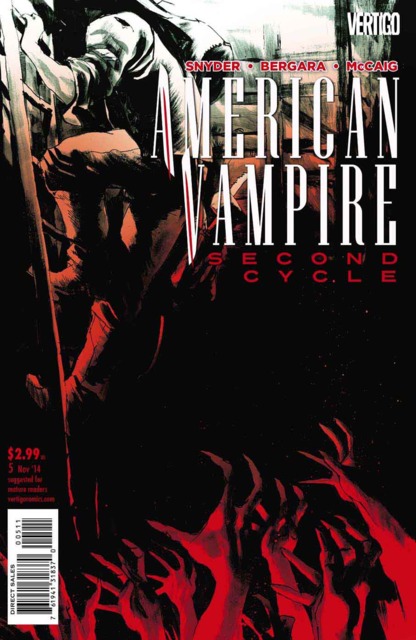