As if things weren't bad enough for Pearl having Skinner Sweet back in her life, it turns out there's something even deadlier.

We've seen some gruesome and dark things in AMERICAN VAMPIRE but Scott Snyder and Rafael Albuquerque have created something worse. It's been great seeing this story pick up some years after the previous volume. We're slowly seeing some of what has happened in between, such as the state of the Vassals of the Morning Star. Even though Skinner Sweet is an incredibly vile nemesis, there's something pretty cool about seeing him working with Pearl Jones once again. Skinner is pretty evil but we're seeing there's something even worse.

With the attack against Pearl and the refuge she set up for others, there's a nice frantic tone to the story. You can feel the adrenaline kicking in as a deadly evil force is looming over them. Albuquerque's art is, as always, phenomenal. Seeing the looks of panic, attacks, and chaos pulls you into the story. The colors give it all a surreal feeling and after you read through the issue, you'll find yourself going back and taking in any and all details you might have zipped by.

It's not all action scenes as the characters do get a chance to catch our breathes. This also gives us a chance to see more of what's going on around the characters. The more I see, the more entranced I become. The last page should make you say "Oh man..." to yourself as you realize you now have to wait for the next issue.

It's not really a complaint but with the fast paced action as they face the attack, I found myself reading through the pages quickly. This made parts of the issue go by faster. Of course, I really only have myself to blame for this.

We're seeing some dark times for Pearl Jones and Skinner Sweet in the pages of AMERICAN VAMPIRE. Scott Snyder and Rafael Albuquerque have introduced an even deadlier threat as we witness the havoc and destruction unfold. Snyder's story and Albuquerque's art form the perfect combination and the action keeps you on the edge of your seat. You know things are bad for your character when they're forced to work with their former enemy against something even worse. The only bad thing is having to wait for the next issue to see what's going to happen next. 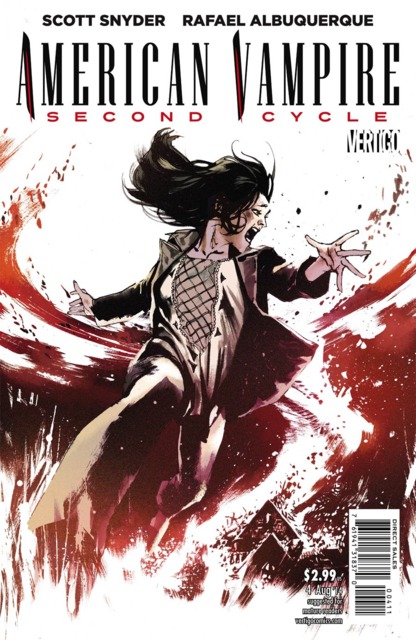