Just when you thought you’d seen all the evil monsters there are to see, we find out there’s something worse.

The “American Vampires’ are a tough breed. Throughout this series, we’ve seen there isn’t too much they can’t handle. Pearl Jones has also managed to survive quite a bit. The problem now is, she may have found there’s something she can’t handle.

Throughout this entire series, Scott Snyder has continued to flesh out the characters and put them into a variety of different situations. The decades that have passed in the comic adds to the history of this comic world. The recent passing of ten years between this series and the last was a bit of a shock at first but it has added some mystery to the series as we are now seeing how much things have changed in that period. The return of old friends makes you smile and you do get a sense that time has passed since they last saw each other. Aside from reunions is the crux of the series. There is a bigger threat. Something older and deadlier that just might be too much for our characters.

Rafael Albuquerque's art never falters. All the characters and settings look as you would want and expect in this series and he continues to add more. Dave McCaig's colors adds a vibrant feel to Albuquerque's art. As compelling as the story and new developments are, you can't help but be mesmerized by the visuals here.

There's not much to complain about. If anything, there are times the bare backgrounds stand out a little. Albuquerque's art is so amazing that each panel is like a separate piece of art but sometimes during the action scenes you'll notice the bare backgrounds. The characters and art in the panel more than make up for it.

AMERICAN VAMPIRE continues to surprise and impress with each issue. I've said it several times when reviewing previous issues, it's surprising to have a vampire series that can be so impressive and fresh. Scott Snyder keeps giving us new situations and takes the story in different directions which keeps us hooked. If that wasn't enough, Rafael Albuquerque's art and Dave McCaig's colors will blow you away. How often do we get such a compelling story with superb art? AMERICAN VAMPIRE never disappoints. 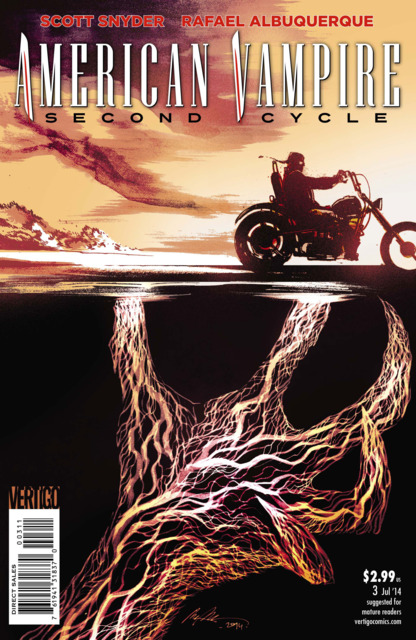