Just when you thought you’ve seen all the dangers that could exist in this comic, Scott Snyder and Rafael Albuquerque introduce us to something new.

AMERICAN VAMPIRE is back!

The first thing you’ll notice is, after a quick trip back to the 1800s, the series jumps forward about eleven years since the last issue. I’ve always felt that’s been one of the bold moves on Scott Snyder’s part. He has an overall plan for the characters and could easily slow time down a little or tell more stories in the periods in between but that’s not his intentions. The pace has always been fast and action packed without feeling like it's dragging.

By jumping forward, you do get a sense of a bigger picture or a feeling that this comic book world is bigger. Of course we have some questions that we'll have to wait to be answered as we dive into new situations and status quo's for for characters like Pearl and Skinner. As we see where the characters are now, you can't help but want to see and know more. It may have been a long wait since the last issue, but it's going to feel like a long wait for the next.

Seeing Rafael Albuquerque's art immediately brings back all the memories of how great this series is. His character designs are killer and seeing some new locations is a treat. He captures the dark vibe that Snyder sets forth perfectly. This is the kind of art you either need to stop and appreciate with each panel or take a second read through to take it all in.

If you've been reading AMERICAN VAMPIRE, you should be overjoyed to know it's back and just as great as you hoped it would be. Scott Snyder and Rafael Albuquerque are back with a vengeance. You've had time to get caught up and now is the time for the next chapter to begin. This is a series that has been consistent from the beginning and it's great to see the entire story moving forward, amping up our excitement even further. 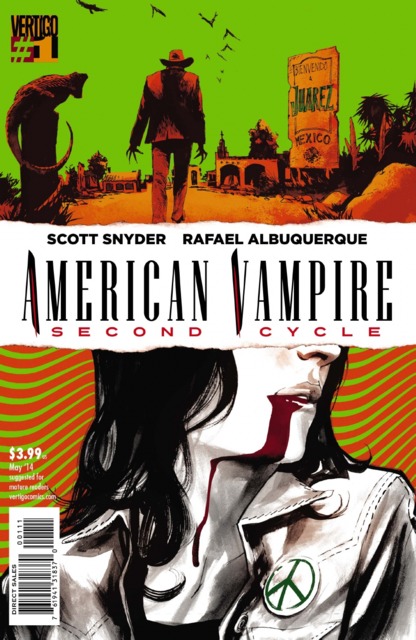