Scott Snyder and Rafael Albuquerque have built a fascinating and rich world in AMERICAN VAMPIRE, and this first anthology installment shows what happens when they invite talented pals from across the industry to play in that world. As interesting of a ride as it's been following the core story, variety is the spice to Skinner's sweet, and it's fun to see other creators riff on what Snyder and Albuquerque have laid down.

Bounded only by the in-universe rules and concept of vampires, geography (though we get to see some action a bit further north), and time, the anthology explores several different facets of the series, and dives deeper into "lost tale" territory. Some stories fill in gaps in history, some expand small moments from the main series into fully rendered stories, and others are imaginative expansions into geographic regions and cultures that aren't addressed in the main series. All capture the unique essence of AMERICAN VAMPIRE in tone and theme, while enriching the world with unique characters and settings.

Fundamental to the concept of the American vampire is the sense of the individual; whether that means empowerment, victimization, or observation (or any combination thereof) is entirely dependent on the story, but every inclusion in this anthology is keenly focused on its protagonist. In contrast to his European relatives, the American vampire isn't a pack-social creature; he strikes out on his own and forges his own story. This essential trait is threaded throughout the work, and even the stories set pre-Skinner (involving European clans) involve protagonists that embrace the spirit of individualism that later manifests in the American species.

Also lending a sense of collectedness to the anthology: the unapologetic portrayal of vampires as violent creatures. We might find a reason to be charmed by Skinner or empathetic to Pearl, but that doesn't change the nature of vampires, and despite the wide variety of artistic styles and story formats, no team spared the brutality (with perhaps the ironic exception of the mostly-blood-free "Bleeding Kansas").

A side effect of the anthology format: certain creative choices that don't stand out much in single issues, such as whether the title appears on the first page or later, have a small but strange impact on the visual continuity of the larger book. It's not that the shift from story to story is unclear at any point -- variations in art and lettering styles are strong enough that each component is distinctive; there's just a subtle effect that can be likened to mixing flatware sets. The fork and knife do what they're meant to do, but if you look closely, they don't match. (Some readers may not find this disrupting, and indeed, who cares about matching flatware if the meal is tasty?)

If we had any doubts about the robustness of the AMERICAN VAMPIRE concept (we didn't), the clever and varied palette of anthology stories proves it out. Each story stands on its own, but fits neatly into the world, whether by showing us glimpses of characters we've come to know throughout the main series or by riffing on the purpose and personality of the American vampire throughout the past century or so. 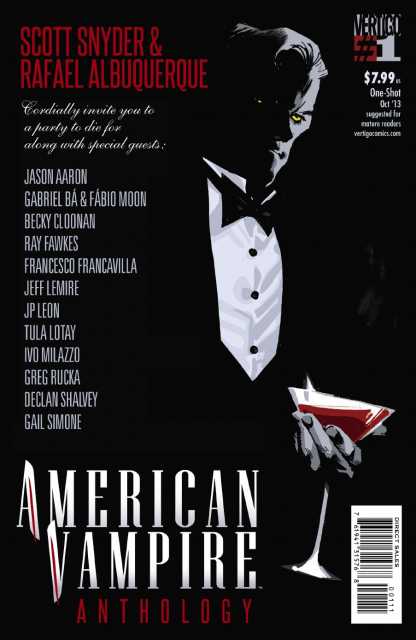