Amazing X-Men #18 - The Once and Future Juggernaut Conclusion

The X-Men battle the newest Juggernaut!

What do you do when your team is up against what seems to be an unstoppable force that is near impossible to defeat? Do you go into the battle head-on and hope for the best or do you sit around by a fire and plan out a strategy?

As simple as the answer to that question may sound, most comics jump right into the action, but what I loved about this issue was that Christopher Yost took the time to have these characters sit around and talk about how they're going to take on this battle, even though there is a ticking clock going on with the Living Juggalith (Just made that up) creating carnage and destruction wherever he goes. This is, quite frankly, a refreshing scene to see people discussing strategy, even if it does take away from what could be a pretty awesome action sequence.

Don't worry, though, there's still an awesome scene of action as well. Yost delivers a very balanced comic that offers something for everyone. The fight with Living Juggalith is a ton of fun and frankly, the outcome of that fight wouldn't be the same without that earlier stuff of planning it all out.

Minor spoiler ahead. Seeing Living Juggalith was really cool, but I'm actually glad it isn't sticking. However, this is a character I'd love to see come back in this series, even though we're coming to a break for a few months for SECRET WARS. The battle plays out well and will give readers an appreciated for this under-utilized villain.

The biggest concern in earlier issues was with the art. Jorge Fornes wasn't bad, but there were inconsistencies and it was a little shaky here and there. However, except for a couple opening pages, the art is really cleaned up here. It seems like there's a completely different inker working on this issue, but according to the credits, it's still Fornes. If this is Fornes just trying something new, then he needs to keep it up because it's looking great with his style.

The newest Juggernaut outfit, at the end of this issue, is supposed to be a mixture of the avatar's costume and Cyttorak, but it looks clunky and I'm really not feeling it. It seems like we're almost seeing the evolution of this costume and we really only get one panel to judge the costume, but it just looks too bulkly.

The finally of this Juggernaut-filled story really delivers and the conclusion really pays off and sets up the next story line extremely well. In fact, this is easily the best issue of the run and Juggernaut fans may not love the final costume they see at the end of the issue, but they'll certainly love how this story plays out. I cannot wait to see what comes next in this series. 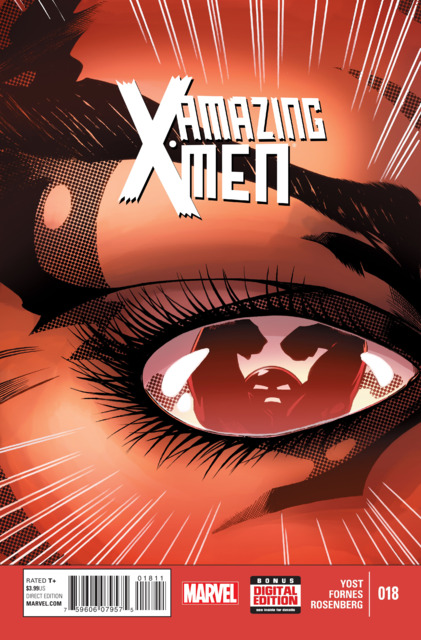