We have a new X-Men series and besides the return of a certain beloved character, we'll also see another familiar character joining the fun at the Jean Grey Institute.

As the cover makes it plain to see, this issue focuses on the return of Nightcrawler. Since his death in 2010, fans have been waiting for his return. We know the drill by now when it comes to comic book deaths. The idea of Kurt returning isn't an easy one to accept. We do want him back but there is the fact that he is in a paradise of sorts. Having Kurt return would mean being torn away from the possibility of being at peace in exchange for all the horrific events being an X-Man guarantees.

But it won't be a simple return. We're seeing there may be a little more as we find out details to where he's been all this time. Along with the return of a person wanting to cause grief for him, the X-Men will have their hands full when they get pulled into the conflict.

Speaking of the X-Men, with Jason Aaron writing, this almost feels like an issue of WOLVERINE AND THE X-MEN. We're seeing the wackiness of the Jean Grey School for Higher Learning as a new "teacher" arrives to join the team amidst the dangers that are brewing. In other words, it's just another day at the Jean Grey School. It's a great addition to the X-Men family and one that many have felt has been long overdue due to her origin elsewhere.

Aaron makes this more than just a bunch of X-Men hanging out in the same place. They are in the middle of getting to the bottom of what's going on but their interaction with each other makes the story feel more welcoming. We see bits of humor and jabs at each other which illustrates the nature of the X-Men. They aren't just a team. Instead of coldly going from mission to mission, we get to see a little behind the curtains with their interaction.

Ed McGuinness' art is great and Marte Gracia's colors make it beautiful, especially the early scenes with Kurt. We're off to an exciting start as the X-Men get pulled into what appears to be a grand adventure.

The common question I've heard since this was announced is, "Do we really need another X-title?" It's a valid question as I can't even keep track of how many there currently are. With Jason Aaron writing this and what appears to be many of the cast from WOLVERINE AND THE X-MEN, you have to wonder what the difference between the two titles will be. It appears, from this issue, that the action will head away from the school rather than focus purely on the students. I am excited about this arc and the creative team involved but this story could have taken place in an already existing series.

Humor in an X-title is great but there were some moments it started feeling like a sitcom. Too many one-liners being flung around. Is it a secondary mutation for everyone to try to be a stand up comic?

There's a new X-Men title in town and we have the makings of a grand and amazing adventure in this first arc. Jason Aaron is joined by Ed McGuinness and Marte Gracia to start off the return of Nightcrawler. We have to wonder if we truly need another X-title but this issue does make a pretty good argument. There are many X-characters hanging around and there is a great opportunity to showcase a different set of X-Men. The addition of a certain red-headed mutant does offer an interesting beginning to the series. Between Jason Aaron, Ed McGuinness and Nightcrawler, there's plenty of reasons to check this out. 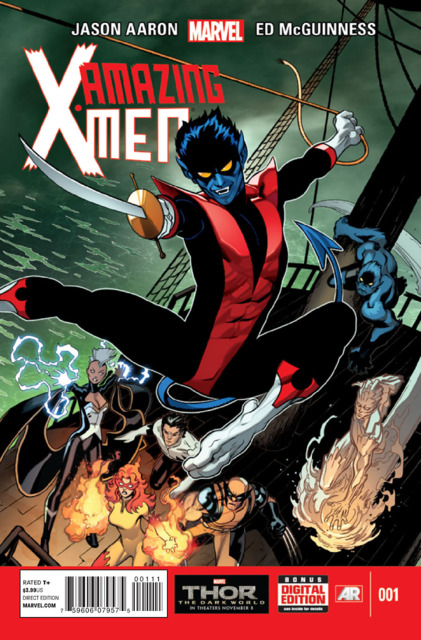