Really? A Spider-Man story where Peter Parker has a sister? It's worth checking out.

What's the first thing you thought of when you heard Peter Parker had a long-lost sister? Chances are you were a little skeptical, as I was. Still, with Mark Waid and James Robinson writing and Gabriele Dell'Otto doing the painted art and the nice hardcover format, how could I resist?

As a really big Spider-Man fan, I'm open to stories with big shaking changes, provided they're told well. Just as I wasn't irate over Doc Ock [temporarily] taking over Spider-Man's body, I'm also okay with the possibility of Peter having a long-lost sister. What makes it work is the way Waid and Robinson present her. Teresa Parker is a fascinating character. I immediately fell for the character. Her backstory made perfect sense. Is it at all cliche? Given the profession Richard and Mary Parker were in, you can easily think of many reasons to explain the possibility of her existence.

As a stand alone story, Waid and Robinson go all out. This is a big grand adventure for Peter and Spider-Man. The globetrotting feel adds a new level of excitement compared to the typical stories of Spider-Man simply swinging around New York City. The more you see of Peter and Teresa together, the more you'll find yourself coming around to the idea of a Parker sibling.

Werther Dell'Edera provides the pencils and Gabriele Dell'Otto's handles the colored art. This adds to the big feel of the story. It's a gorgeous story, both inside and out. We see the Parkers travel to many locations and even get to see Spider-Man wearing a certain other familiar costume. The action scenes are glorious. This is definitely a book I'll be reading again.

There are the obvious questions of continuity. Some things are cleaned up too neatly. At the end of the day, those things don't and shouldn't matter. We get a fascinating story that opens the door to interesting possibilities. You may see certain things coming but you'll find yourself enjoying the story immensely.

I didn't think I was going to like this story. I didn't think it would matter or be important. I was wrong. Clearly the creative team had a huge influence on my decision to buy this without having any idea what we would get. Waid, Robinson, and Dell'Otto take us away on an incredible adventure full of action, intrigue, mystery, and even espionage. It's definitely a different kind of Spider-Man story and that's part of what I enjoyed so much. I did roll my eyes over the idea of Peter Parker having a long-lost sister but Waid and Robinson showed me it could be a great thing. Does this fit into regular continuity? Could it fit in? I absolutely hope so. This is a highly enjoyable stand alone Spider-Man story unlike what you're used to. 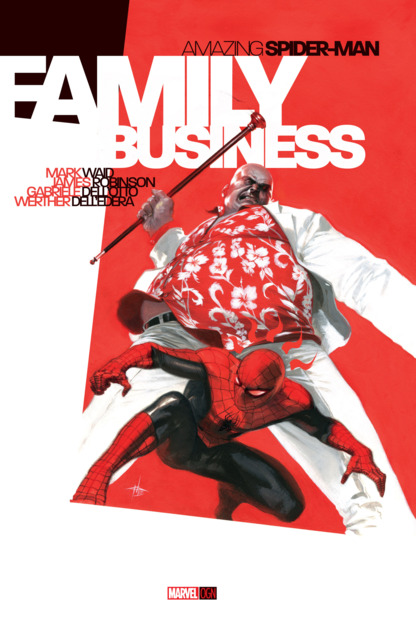