Spider-Man is going global. What? That's right, check out the new era for Spidey.

Let me start by saying I really love Spider-Man. When I started reading comics, I got all the back issues and MARVEL TALES reprints. Usually when you see a review start off along these lines, you know there might be some trouble coming. I'll admit, when I first heard the idea of Spider-Man going global with high tech gadgets and vehicles, I wasn't sure what to expect. This obviously isn't the old Spider-Man many are used to. Maybe that's not necessarily a bad thing.

We come into the issue with some major changes having taken place. This is a result of Secret Wars, which obviously hasn't finished yet, and the established 8 month period that have passed since. That means we have time for all these changes to have occurred.

In some ways, the series does pick up from where we were before Secret Wars. Parker Industries may have suffered a little setback but Peter was on his way to establishing the business. Here, he's taken it farther than we could have imagined. It make sense that Peter could have a successful high tech business. This is the guy that created web shooters when he was fifteen. It's always been a matter of him finding the time and focus to use his brilliant mind. Before this issue went on sale, there were some comparing Peter to Tony Stark. That is actually specifically addressed in the issue. There are some clear differences between the two.

With Peter traveling the world and having "Spider-Man" as his bodyguard, there are some new possibilities. I'll be the first to say I miss the days of Peter swinging around New York, taking pictures of himself in action in order to sell them to the Daily Bugle to make ends meet. That's why we have our back issues, reprints, and trade paperbacks. Having Peter create new tech is allowing him to evolve. He's not the punk kid superhero he used to be. Although, if he's going to be allowed to evolve, it's still a shame Marvel won't let him "evolve" into a marriage.

There are some moments in the issue that will take some getting used to. Spider-Man developing tech for S.H.I.E.L.D. again makes sense but is still a little weird. There were some moments where the dialogue was a little too tongue in cheek. But this is Spider-Man we're talking about. He's the King of bad puns. Seeing the citizens of Shanghai completely adore him during a high speed chase felt like too much. It does show Spider-Man has been able to upgrade his public image as well.

We do have some new characters to go along with the new situations. There are several returning faces as well. This is definitely a new chapter in the life for Spider-Man. Dan Slott took Peter in a new direction with the Big Time story arc. This is just taking it even further. And while it seems like things have completely changed for Peter, I wouldn't be surprised if he managed to completely mess things up and lose it all. That's what the Parker Luck is waiting for. There is, of course, a crazy cliffhanger ending as well. Giuseppe Camuncoli does a fine job making things familiar mixed in with all the incredibly different surroundings. You can tell he's having fun with the issue.

There is the downside of the $5.99 price tag. In its defense, this is a really big oversized comic. Besides the main story, we get five back up stories featuring the other Spider-Man related characters such as Spider-Man 2099, Silk, Jessica Drew, the Web Warriors, Miles Morales, and the return of a recently seen villain. The first four stories are five pages with the last containing seven. These stories weren't completely necessary for this issue. It felt like a continuation of ALL-NEW, ALL-DIFFERENT MARVEL POINT ONE. The stories are great and get you excited for each individual series. It just may not have essential to force them upon Spider-Man readers. Also, there will be diehard Spider-Man fans that simply do not want a change on this level.

The Amazing Spider-Man is back. Dan Slott is once again moving Spider-Man forward in a new direction rather than fall back on the same old stories we've seen many many times. The changes are pretty big and will definitely take some getting used to. It's always nice to see a publisher allow characters to grow and change instead of keeping them locked in the same status quo forever. While some of the changes may be questionable, I'm definitely on board to see where it all goes. Giuseppe Camuncoli's art captures the new direction nicely. We have new faces to go along with the new locations as well as a return of many and some unexpected characters. We're off to an interesting new start. This may not be the Spider-Man you're used to but you'll definitely want to see what happens next. With Dan Slott, you never know what he has up his sleeves. This is Spider-Man and Peter Parker living up to their full potential. 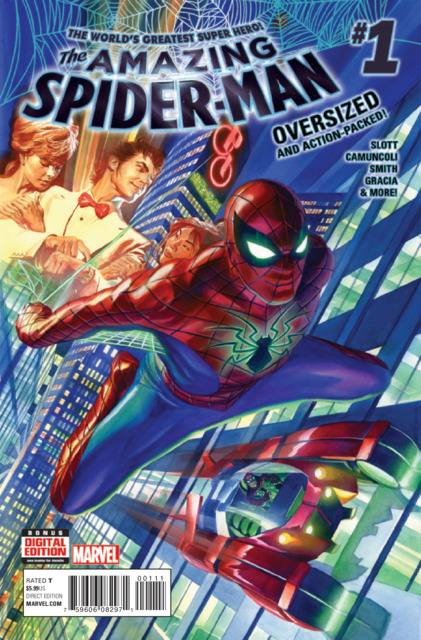