Alpha continues dealing with regaining his superpowers, meets up with Thor and tries to get to school on time. Fialkov has made a character we all hated into a likable one.

There's something refreshing about seeing a new 'hero' face new threats. Alpha is determined to make up for his previous tenure as a hero. When a new villain with a grudge shows up, he dives right in. You could say this is a sign of fearlessness. Perhaps it's more inexperience and cockiness as he may not be quite as prepared to face unknown villains as he might think. We're still seeing this young kid with an enormous amount of power, struggling to try to do the right thing and not abuse those powers.

When it comes to new heroes, of course we'd want to see the occasional guest star. As seen on the cover, events lead to Thor's arrival. Talk about your odd couples. Just try to imagine how an interaction between Alpha and Thor would go. Now imagine it with Josh Fialkov's witty writing style. Obviously we can't have Spider-Man trying to guide Alpha along due to Doctor Octopus' involvement but, if you think about it, Thor's actually a great choice. But there's not need to be concern about a forced crossover as he doesn't have a huge role in this issue.

Fialkov makes sure to cover Alpha's civilian woes as well. Trying to fight a supervillain and make it to school on time isn't an easy feat. This is the charm that THE AMAZING SPIDER-MAN had in the early days. It wasn't just about Spider-Man, the book was also about Peter Parker and his life outside the costume. As you see more of Andy's normal life, you can't help but want to see more.

If that wasn't enough, Fialkov adds a new twist that puts Andy in a tough position. We are continuing to see repercussions from everything he's done before. He has all this power now and the question is whether or not it will be enough.

I've gone back and forth with Nuno Plati's art on this series but something in this issue just exploded off the page for me. The opening battle, Andy at school, the developments at the end - it all just looks great. The vibe of the book is really working for me here.

I simply really dug this issue. I was not a fan of Alpha at all but Fialkov is making me actually like this kid. Seeing how everything develops and the twists and suspense just made this a really fun issue.

I don't want to like Alpha. Josh Fialkov is not giving me a choice. He's made Alpha the perfect flawed character. He had it all and messed up…big time. This is sort of a story of redemption but also one of a teenage superhero. There is a sense of innocence and discovery as Alpha tries to take the opportunity for a second chance. Balancing between being a superhero and a normal teenager isn't easy and Fialkov captures it perfectly. Nuno Plati's art has absolutely grown on me. I was on the fence before but I really like the atmosphere and feeling this book now generates. Fialkov puts Alpha in a tough situation at the end and we get a big cliffhanger. I will definitely be eagerly awaiting the next issue. 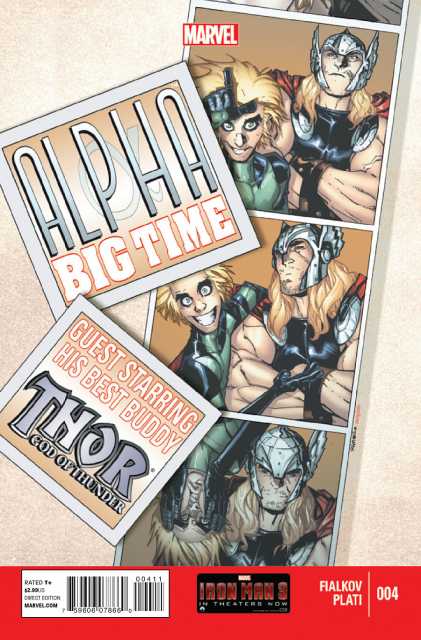