Jonah and Gina adapt to being back in the old west.

Jonah and Gina are back in the past, and Gina learns very quickly that the wild west truly is wild. The dynamic is really enjoyable, since we've seen Gina leading Jonah through the future for the past few issues, and now, Jonah is the guide in the past.

The majority of this story is Jonah telling Gina a story about a man he hunted and how Jonah got the best of him. The story Jonah tells is full of a lot of dialogue, which is a bit different than normal for this book, but it really works within the context of the story. What really works here is that is takes a step back from a bit of the madness the past few issues had and slows things down.

Cliff Richards takes over art duties on this issue, with Mike Atiyeh on colors. The art style is a bit different than what ALL STAR WESTERN fans are used to with Moritat, but Richards style is very welcomed here and gives readers a new look at someone everyone is already familiar with. His style is extremely clean and he works wonders with faces and facial expressions.

The ending of this issue is a bit of a let down. Without spoiling anything, it feels like it's on the way to a reset button for Jonah Hex. It's not something to get too upset about because Gray and Palmiotti always have something planned in the long run.

The biggest problem with the issue is that the majority of it is a campfire story taking place in Jonah's past. The story itself is fine but it comes off as filler in the overall issue. Twelve pages within the issue are the story within the story. While most of this series has been a lot of fun and easy to love, this is the first time within my time with this book that I wasn't all in.

ALL STAR WESTERN #29 isn't bad, but it's one of the weaker issues in what has been one hell of a series. Cliff Richards art isn't what fans are used to with this series, but the change is nice and he does a great job at sculpting faces throughout the issue. The problem lies in the fact that it's a story within a story and feels a tad like filler. However, this is a series that ultimately always delivers, so we're interested to see where it goes next. 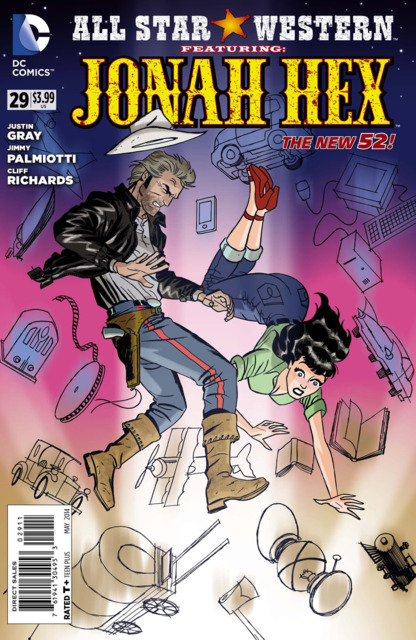