Things tend to get a little crazy for Jonah Hex but they're about to get even crazier. There's a new sheriff in town and you can imagine what Hex will think of him.

It's great to see how much variation this book has. As a fan of the previous volume, I was a bit concerned over some of the ideas being presented in the this series. The idea of Jonah Hex being tied to Gotham City or Amadeus Arkham was a little strange. Throw in the Court of Owls from the BATMAN crossover, and it just seemed a little weird. The key to the success has been Jimmy Palmiotti and Justin Gray.

Palmiotti and Gray previously wrote seventy consecutive issues of JONAH HEX. It's no surprise how well they know the character. Adding ties to modern continuity has been something they've handled with ease. It started becoming a welcomed idea seeing the bridge between the two time periods. When Arkham departed the series, I was a little bummed even though I sometimes questioned the need for him.

In this issue, we get a new connection to the present. Even one to the future, in a way. It might be a spoiler but word has gotten out that Booster Gold appears in this issue. This isn't as odd of a crossover as some might think considering they sort of met in 2007's BOOSTER GOLD #3 (although whether or not that still happened is another issue). There has been some question as to what happened to Booster in JUSTICE LEAGUE INTERNATIONAL ANNUAL #1 and hopefully we'll get some answers here. Jonah Hex is a serious character and it's a treat when he's paired with someone who isn't as serious. There definitely is something going on here.

Moritat continues to shine in this series. Caution needs to be used when illustrating a Western comic. He always manages to perfectly capture the vibe of the series and time period.

There is another STORMWATCH back up here. We're getting pieces to a bigger puzzle and there is some fascination in seeing the story play out while wondering where it's going to go.

It took a couple seconds to realize the main story ended and the back up was beginning. There wasn't a clearly labeled "End" or opening credits on the following page. The back up story was interesting, but only in trying to figure out how it's going to fit into the bigger picture. At this point it didn't feel absolutely necessary. At least it didn't just yet. We'll have to wait and see what comes of it.

Jimmy Palmiotti and Justin Gray have done it again. We've seen some strange gatefold covers on the DC Comics this month but this one makes sense. We've seen crazy crossovers before but the appearance of Booster Gold here opens up more questions rather than answer the ones since his disappearance in the New 52. Watching the events unfold is just one of the charming aspects of this issue. In an age where Western comics may not be at the top of readers' lists, Palmiotti and Gray show us that doesn't have to be the case. With the various connections we're seeing to the modern continuity, you get a feeling of anything goes even though certain events still need to be set in stone. Moritat continues to capture the vibe of the series. There's no telling what may happen next and that's the fun part of the series. 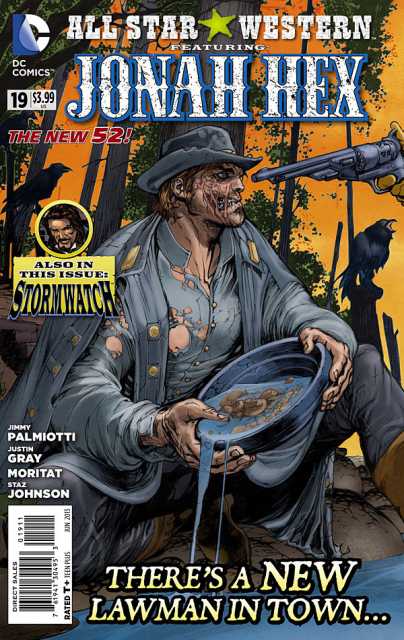