All Star Batman is not your typical Batman comic. After writing the character for over fifty issues, Scott Snyder is trying something new. He's taking some risks. The results have been interesting and exciting. With a slightly new take on Two-Face, Batman is in a different element as he tries to escort the villain to a certain destination. Two-Face isn't making it easy as he put out a request to stop Batman with high rewards in return. He knows everyone's secrets, and they are determined to prevent theirs from being released while also accepting a big payout.

Batman's always had the home field advantage in Gotham. He's occasionally ventured elsewhere, but it's always been under controlled conditions. Being on the run, Batman has a lot more to deal with. There are unknown territory and situations he needs to prepare for. This is where the story shines.

With Batman having to be on his toes, he, and readers, don't know what's coming next. This isn't the ultimate crimefighter who can easily take on anyone, as Batman is sometimes viewed. Batman doesn't have superpowers. Snyder isn't afraid to show us that and he can get injured.

Along with the various new gadgets, there's a nice big feel to the story. Having the action move across different locations with numerous villains gunning for Batman creates a frantic atmosphere. Getting to see Duke Thomas in action is a huge bonus.

John Romita Jr's art is well-suited for this story. I've always said he excels at drawing gritty action with characters getting beat up. You can see, and almost feel, Batman's injuries and pain. Danny Miki's inks gives it all a nice tight feel and Dean White's colors are gorgeous.

The only downside to the main story is with many other DC titles shipping twice a month, it almost feels like this story is lasting a little too long. Obviously, that isn't the case with this only being the fourth issue. This isn't a critique against this title, but rather a feeling you get while reading.

For those wanting even more Duke Thomas, we have the back-up with art by Declan Shalvey and color by Jordie Bellaire. I've never been the biggest Mr. Zsasz fan, but Snyder used him in an interesting way.

For a character that's been around close to 80 years, we've seen countless different stories take place. Scott Snyder has been writing the character for the past few years, yet he keeps finding new ways to approach the storytelling. Snyder and Romita are delivering a high-action story with different twists and turns. The back-up story gives us more on Duke Thomas and continues to flesh him out. If you want a Batman story crammed with action where he's taken out of his element, this is the one for you.

I didn't know whether to "lol" or "smh" when KGBeast called Batman salty.

Before there was Bane, there was KGBeast. Really happy to see this character getting some love from Snyder.

This has been a great arc. I originally moved back to reading Batman when I heard Tom King was writing it, having loved his Vision. But I randomly picked up All-Star Batman soon after, and it has been blowing the main title, which has been a little inconsistent with the dumb monster crossover, out of the water. I've really enjoyed the peek into Bruce and Harvey's shared time together as kids, and the origin of the coin. I do think it's a little unrealistic for all the random people of the area to just instantly turn to killers because of Dent's threats though. Seems too plot-driven and not really a realistic portrayal of what would happen--too universal a reaction, and too instant.

But overall I have really enjoyed this, and Romita's art, and the colors, have been great.

Been loving this comic. :)

All star Batman's gear should replace his standard gear haha

Great issue but god that art is just not my cup of tea.

All star Batman's gear should replace his standard gear haha

Bruce, you are the James Bond of superheros - Barry Allen.

I'm still torn about this series.

"Getting to see Duke Thomas in action is a huge bonus." Wouldn't say it's much of a bonus at all, I'm still waiting for him to be written out of context.

Great issue but god that art is just not my cup of tea.

I'm old enough to remember when JRJ was a really great artist... 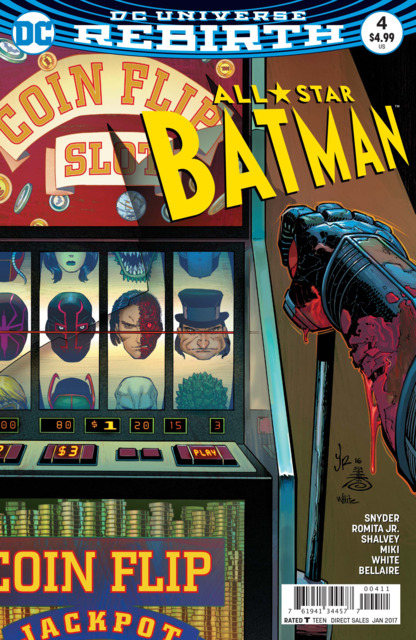