Scott Snyder returns and teams up with John Romita Jr to bring a new load of misery upon Batman.

The moment many of have been waiting for is here. Scott Snyder is back writing Batman. You'll notice right away, this isn't a simple continuation of the previous Batman volume. Snyder is now working with different artists and aside from the art, there's a big change in the vibe of the book.

It seems Batman has gotten himself into a bit of trouble. Deciding to take Two-Face to an undisclosed location in order to put a stop to his diabolical plans, Two-Face threw a big monkey wrench into the plan. Batman is now the most wanted man in the state because of the offer Two-Face put out. We're used to seeing Batman take on crazy threats and odds; this is a case where he truly doesn't know what to expect. He'll be facing danger around every corner. It won't be the same as fighting his normal enemies.

John Romita Jr's pencils and Danny Miki's inks with Dean White's colors capture the energy in this new environment Batman is now fighting in. There's a level of grittiness as Batman is forced to take different means to try to deal with Harvey Dent. He won't be able to rely on his normal toys and gadgets. Snyder is giving us a new take on Two-Face and the art team is showing how creepy and dangerous he can be.

If that wasn't enough, there's an eight-page back up also written by Snyder with pencils and inks by Declan Shalvey and color by Jordie Bellaire. It's a great look at Duke Thomas and how he got to be in his current position.

All Star Batman may be another series with the Caped Crusader written by Scott Snyder, but it's definitely not the same Batman book you read before. Snyder is giving us a new take on Two-Face as well as placing Batman in a situation that just might be out of his comfort zone. Batman is usually prepared for anything, but he'll have his hands full trying to complete this mission. John Romita Jr's art and Dean White's colors look fantastic and nicely capture the vibe of the story. To make things even better, we get a cool back up with art by Declan Shalvey and color by Jordie Bellaire. This book is continuing the new trend in the Batman Rebirth titles by having a different flavor to it. Each title feels separate and makes the reading experience more exciting. All Star Batman is off to a great start, and you'll be on the edge of your seat waiting for the next chapter. 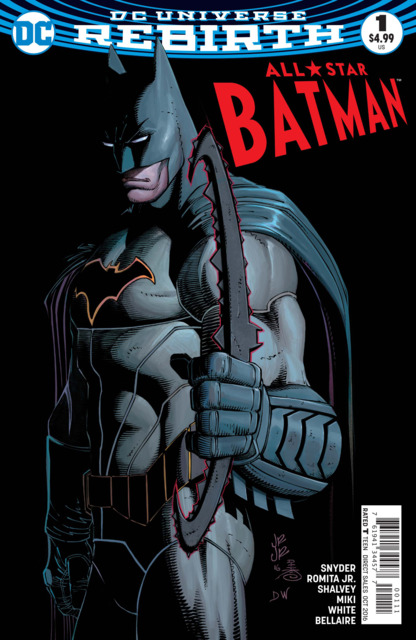