People are talking about this issue but there's plenty of other things going on you won't want to miss.

It's likely you may have heard a bit about this issue already. First off, it's a great refresher issue for the team. Coming out of the cosmic Black Vortex event, we see the younger members of the X-Men allowed a chance to catch their breath. Throughout the history of the X-Men, it's these sort of issues that help to flesh out the characters some more. Seeing their interactions as teammates and friends makes them feel a little more human. This is something Brian Michael Bendis excels at.

This downtime includes the moment that has everyone talking. As mentioned HERE, a member of the original X-Men has been revealed to be gay. There's been a lot of discussion both on our site and the internet in general. It's not the focal point of the issue and shouldn't be the focal point of this review. Some have argued that this is a total retcon while others have said it's something we've seen coming for the last twenty years. Either way, it shows that despite the original members being pulled from the past, anything is still possible. We're seeing the characters shape up in different ways than they originally did. How this affects the big picture is unknown and could cause headaches. But with alternate timelines and the upcoming Secret Wars event, there's still the chance of anything happening. And while some argue that this doesn't make sense since the character's older/present day self isn't gay, it is totally possible that the character is and is just denying it to everyone.

As mentioned, there are other developments as well. We some follow up on a character that has changed during Black Vortex. There's also the point that after the X-Men left Utopia, no one bother to really check the place out. With mention of the "Utopians" in the issue solicit, that's the bigger part of the issue. What will this group mean for the future of the X-Men and why have these certain individuals decide to hide out there?

Mahmud Asrar's art keeps getting better and better. You can see he easily has the hang of drawing the characters. The moments that bring a smile to my face is seeing the expressions he puts on the characters, especially when they're allowed to interact with each other instead of fighting some huge galactic threat.

Obviously that one moment with the one member of the X-Men is going to overshadow the entire issue. People are entitled to their opinion on it but hopefully everyone can remain respectful on the topic. As mentioned, many readers don't feel this is completely out of left field. The important thing is to see how this plays out. Will there be any follow up or is it something that just happened and then will be quietly tucked away?

I love Bendis' humor and the way he sprinkles it in his writing. The part with Maria Hill was funny but almost felt like a little too much for her.

The X-Men have been involved in a big cosmic event with the Guardians of the Galaxy and others. Returning to Earth, they get the chance to unwind a little, Brian Michael Bendis style. Bendis has a knack for allowing the characters to live and breath like humans. It also allows for some growth in the characters as well as a big revelation that has everyone online talking. The revelation of an original X-Men being gay can be a big deal for several reasons. But it's also not the main focus of the issue. While we'll have to wait and see how this character's allowed to progress from here, Bendis also sets up a new thread with the introduction of the Utopians. Mahmud Asrar's art keeps getting better. His take on the team and his depiction of their expressions is gold. Pick up the issue for the reason everyone is talking on and on about but also check out the other developments happening around the characters. 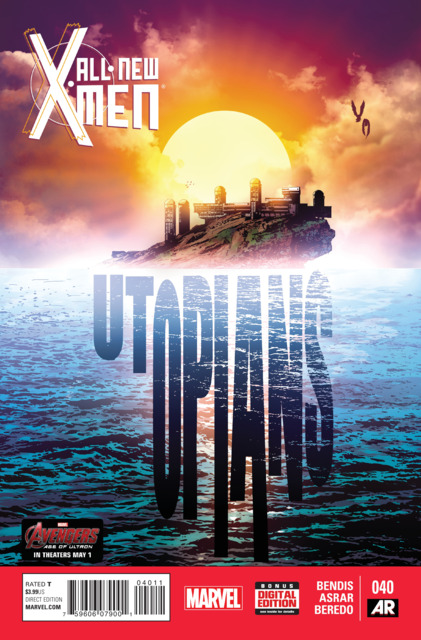