Battle of the Atom is over and now the repercussions can be explored. Find out what's next for the original X-Men.

This shouldn't be a spoiler but things have changed for Kitty Pryde and the original X-Men. Their decision to leave Wolverine and the Jean Grey School for Higher Learning changes quite a bit. In some ways it's another new beginning. Just as the original five were getting their surroundings, they now have a new location and X-members to get accustomed to.

Along with the original five, we're seeing what's next for Kitty Pryde. Where will she fit in with Cyclops' mission to save mutantkind? More importantly, long time fans will rejoice in Kitty and Illyana being together again.

With this marking a new chapter, new readers will be able to jump in pretty easily. Characters are being introduced to each other and we're seeing the new tension that has developed in recent issues. Brian Michael Bendis continues to move the story forward while giving us plenty of great little moments. It's an issue that isn't heavy on the action, but that's a good thing. After Battle of the Atom, they (and readers) need some time to decompress. The interaction between characters has always been a big part of the X-Men lore. It's what makes us care about the characters and the drama is what moves the story forward.

Stuart Immonen's art and Marte Gracia's colors is what I now associate with these characters. The look of the characters and their expressions is a huge part of shaping who they are. The new cast (from Cyclops' camp) joining the title should be interesting to see as well.

Should we discuss Kitty's decision here or should it have been left in BATTLE OF THE ATOM #2? It seems a little extreme considering the tension between the two factions before. Cyclops seems very accepting in allowing others to his "secret" base. It feels like anyone could say, "Hey, I'll join you guys. Where are you staying?" and report back to Wolverine. Perhaps this is all a trick on Kitty's part? Seems doubtful.

I'm not quite sure how I feel about the new costumes and colors. It's interesting and might take a little getting used to. At least the colors are a bridge to the costumes they would eventually get after their original ones.

The ending feels a little abrupt.

It's time for the next chapter for the original X-Men. Brian Bendis and Stuart Immonen are taking the team (and Kitty Pryde) in a new direction and there's no telling what will happen next. Bendis moves the story forward while continuing to flesh out these characters, adding to what we already know about them. These are no longer simply the "original" X-Men. Bendis is evolving them further due to the new experiences they are facing. The setting may have changed for the characters but we're still going to get the same old fun that Bendis has been delivering since this series began. 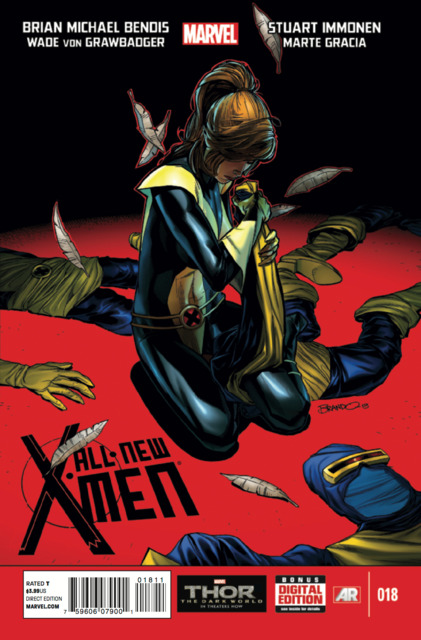