Because three different teams of X-Men from three time periods isn't enough, check out another team from the future. It's like a crazy party!

This issue opens up with a a surprising look at the future world for the X-Men. We see some familiar faces and it's great that not all futures are horrific. Or are they?

If you've been keeping up, you know in the last chapter, we discovered that the X-Men from the future may not fully be exactly who they said they were. They are, but they're not. Sort of. And because time travel isn't messy enough, we see what happens when Magik takes young Beast and Iceman into the future. There's so much time traveling going on!

This trip into the future allows us to see more of the potential world. That's one of the fascinating parts of this story, seeing the possibilities plus how everything can go wrong. And once again, we Brian Michael Bendis gives us a final page that leaves us hanging a little with a hunger for the next part.

Stuart Immonen's art is so good in this series. You'd imagine he must be having a ball drawing all these different versions of the X-Men. It's great seeing the tiny bits of humorous expression, especially on young Iceman.

This felt like a quick issue, despite the different scenes and time periods. Even though we get to see the future and more characters, it felt like this was almost just a filler for the next chapter. We can assume we'll get a nice big clash between all the various X-Men from the different periods. It's just a little strange that we're over half way through the story and we're still being introduced to new players in that big clash.

I've said it before and I'll say it again, Battle of the Atom has become one of my favorite crossover events. There's so much craziness and twists that you're never quite sure what Brian Michael Bendis is going to throw at us next. Just when you think the story would begin to wind down to some big epic conclusion, we're still seeing the story being set up. Stuart Immonen has become one of my favorite X-Men artists with his work on ALL-NEW X-MEN. The little details he gives in the characters' expressions fits perfectly with Bendis' script and the subtle humor sprinkled in. I can't wait for the next chapter and thankfully we won't have to wait long. 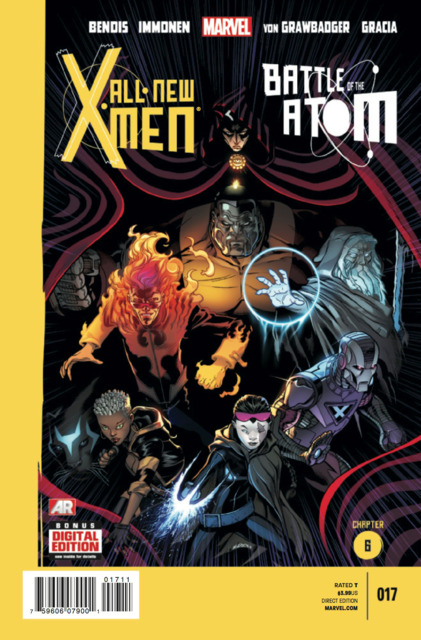