Did you read X-MEN: BATTLE OF THE ATOM? This issue is Part 2. If you've been digging the X-MEN comics lately, you're gonna love this.

Seriously, you want to read X-MEN: BATTLE OF THE ATOM #1 first. It's Part 1. And it's really really good. See the review HERE.

This week marks the beginning of a new event for the X-Men. The great thing about it is once you read the first part (in BATTLE OF THE ATOM), you don't have to wait another week for part 2 since that happens here.

Without giving any of the specifics away, this issue does pick up after Part 1. We do see Cyclops' team after what just happened with them. This issue also contains the actual appearance and the meat of the future X-Men explaining why they're in the present. We may have seen future and alternate versions of the team before but it never gets old, at least not for me. There's something cool about seeing possible future versions of characters we know or ones we don't know yet. It's a dramatic entrance and you'll be on the edge of your seat, hanging onto every word.

Stuart Immonen does what we've been loving since the series started. It's great seeing his take on the newer versions and seeing how they interact. Brian Michael Bendis may set the story up but Immonen brings it to life. Seeing the expressions on certain characters as they see their possible future selves is priceless.

And if you're worrying about the different parts being filler, this one sure isn't. Wait until you see the twist/reveal at the end. Woo!

The action sort of kicks right in. Yes, that could and should be a good thing but it's felt like this has been slowly building up throughout the series and now suddenly the problem must be dealt with. The future X-Men give a reason but of course we can't help but be slightly skeptical. Is there some flaw in their reasoning and methods or is there more to come?

The twist at the end felt out of place. We have a big secret being kept and then suddenly it's, "Oh by the way, this is the reason we did this one thing."

Like many others, I'm not a fan of the big crossovers that keep popping up right after one ends or at the same time as another one. When you get a story like this, one full of fun and excitement, you can't help but be on board. Brian Michael Bendis has been plotting out this story about the time-displaced X-Men for the past 16 issues. Now it all comes to a head with the force of a charging bull. Stuart Immonent is on hand to bring the story to life. You'll have to take time to take in every little detail and depiction of expression on each page.

It's a new X-Men event but this is off to a tremendous start. Reading this story reminds me of that feeling when I was a kid and first started reading X-Men comics. There's a sense of wonder and excitement. I am completely on board with this. 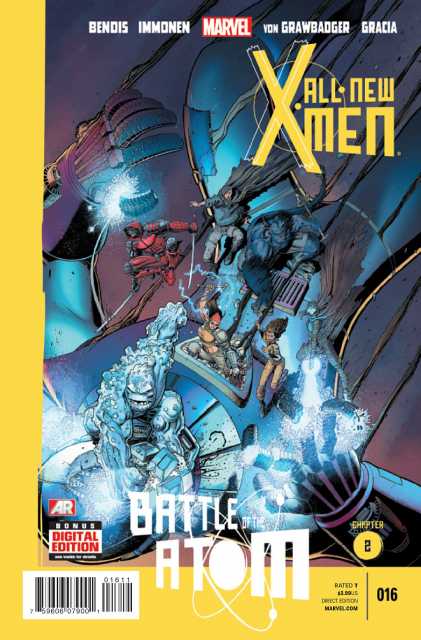