It's brother vs. brother as the new (old) X-Men meet the Uncanny Avengers.

With each issue of ALL-NEW X-MEN, I just can't get enough. We've seen many time travel stories but there's something about seeing the young X-Men from the past trying to adjust to everything in the present. There is that tragic innocence of the team and as they discover more and more of what the Marvel Universe is like today, you get a clearer idea of just how much has changed. We know comics can be crazy and this is a great way to illustrate how far things have come since the early days of the Marvel U.

We get some great interactions between the two teams. You don't really think about what the different relations and potential reactions waiting to happen. Young Cyclops and Havok would have a lot to talk about. There's also the fact that these X-Men only know Scarlet Witch as part of Magneto's Brotherhood of Evil Mutants. It's the little things like this that help make this series a blast.

The fact that we have two teams clashing could have resulted in the stereotypical encounter. There is some surprise and tension but it doesn't come across as cliché, thankfully. Brian Michael Bendis gives a great mix of emotion and reactions in this meeting. Considering it's mainly about this meeting and there isn't a lot of other stuff going on, it's still a highly enjoyable issue.

With each issue that Stuart Immonen does, I love his art more and more. He's created a great feel for the difference in the old and current versions of the characters. There's so many panels filled with tension and you can feel it from the expressions on the characters' faces.

Seeing what Jean does has been fascinating. But her reaction to Scarlet Witch's presence and involvement in M-Day seemed a little weird. We know she completely read the current day Beast's memories so you would think she'd be aware of what happened to mutants in recent years. Granted she had to take in a lot of information back in that trip through Hank's mind but even if he wasn't directly involved in the events, she should still have picked up on what's happened.

I'm not completely crazy about Mystique's storyline in the series. It's not completely clear what her full intentions are and that is part of the story - seeing it unravel. I'm just finding myself more concerned with the young X-Men and their reactions/adventures versus what Mystique, Sabretooth and Lady Mastermind are up to.

I can't get enough of this series. Bendis and Immonen continue to make this series a blast. In an issue that pulls back the action, we still get so much story. The meeting of the young X-Men and the Uncanny Avengers opens up some great interactions and that's what's so fun about this series. Mystique and her crew are still up to their usual shenanigans but it's more about the potential explosive nature of the young X-Men being in the present. This is exactly the amount of good times and storytelling I want in my X-Men comics. 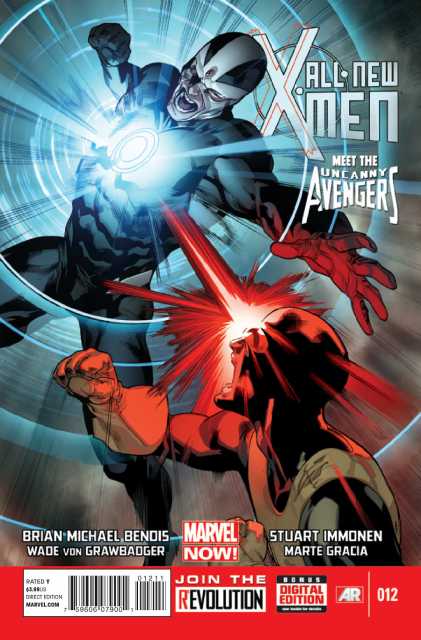