It's X-Men vs X-Men and it's going to get really ugly. Good thing we have Stuart Immonen's art to make the ugly parts look so dang good.

Last issue we had a bit of a cliffhanger. The older (present) version of Cyclops arrived at the Jean Grey School for Higher Learning and made an offer for the mutants to join him at his school. Cyclops more aggressive/survival attitudes has painted him as trying to start a revolution against the human race. While we do know who decided to go with him (thanks to the spoilers in UNCANNY X-MEN #5), seeing what happens next is key.

When I saw we were getting a sort of rehash to what we already knew, I felt let down. But then Brian Michael Bendis cranked things up. The situation gets extremely intense and uncomfortable. It's like being at a friends house as a family argument erupts. You feel awkward and want to sneak away but there's no way to do so.

With the tension so high, there's no telling what might happen. The idea is try to handle things in a calm manner but even as you see some of the things that happen, you start to feel a little angry as well. It's easy to understand the emotions everyone involved is faced with.

Stuart Immonen's art is top notch as always. There is a broad spectrum of emotional scenes taking place and Immonen nails them all. As soon as you read the issue you almost feel like immediately reading it again.

Mystique's plan continues to unfold. We see Mystique use her abilities to try to infiltrate a person's private information. It makes sense that she could do this but it also seems that the individual would have higher safety protocols to prevent this sort of thing from happening. Mystique isn't the only shapeshifter in the Marvel Universe so you would think this idea isn't completely unheard of.

ALL-NEW X-MEN continues to be one of my favorite Marvel NOW! series. There is something about the innocence of the younger X-Men forced to deal with the craziness of the current time period. Throughout everything, you can't help but wonder what effects this will have on everything. It's part of what keeps you on the edge of you seat. We know there a crossover coming in the Fall so, more than ever, you'll want to keep a close eye on what's going on. Brian Michael Bendis' portrayal of young Jean Grey and Kitty Pryde is enough to warm my heart. These are two of my favorite X-Men characters and seeing them together reminds me of Kitty's first appearance when their roles were reversed. Stuart Immonen adds to Bendis' writing by making everything look so good. There have been some great runs in the X-Men's history and this just might be my favorite one in recent years. 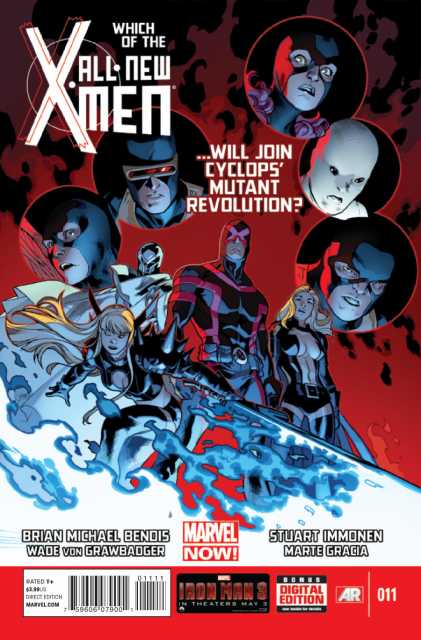