Last issue saw Danger break free from her captivity with the power of LOVE!...okay, so it was more like the surprise of organic contact rebooting her higher AI functions, but we already see that it’s not as simple as that. Danger (amazing use of that name for some particularly punny purposes) is now puzzled, not just over “feelings,” but her role both in the team and the world. Peter David manages to sidestep the cliche “Pinocchio” story of the robot that wants to be real, while indulging in a subtle variation on that theme, but it works amazingly well due to the rest of the cast being written as they are. From Quicksilver’s covert op to Lorna continuing to come to terms with her past and Gambit being ESPECIALLY befuddled with how to react to Danger’s newfound lust for life’s answers, the team is coming together amazingly well. We get to see the introduction of still another character who may or not become a permanent teammate, but while the cover gives away his identity, his introduction will be extremely unexpected for fans of his and certainly there will be some explaining to do when the dust settles.

Carmine Di Giandomenico keeps his incredible streak of amazing linework going, giving every character their own unique body and facial language that communicates incredible amounts of information on every page, from how they want to be perceived to how they actually feel, I swear I could almost see their ticks in full motion in some panels. Lee Loughridge continues his incredible run on colors, lending the title a throwback-70s feel but with a much richer, fuller palette than those books tended to have. The general colorization of the book, the “filter” through which it’s viewed, changes in extremely dynamic ways, giving not only a great tone, but cementing the idea of the massive, corporate edifice that the issue mostly takes place in.

We now have complete, 100% evidence of Serval C.E.O. Harrison Snow being a complete and utter scumbag at best. The full extent, as this is comics, will likely be much, much worse, but, and I mentioned this in my last review when it was only being hinted at, I would’ve liked a lot more time to parse out whether or not this company was on the up-and-up. As it is the “billionaire villain” is common enough that anytime a massive corporation is introduced in a piece of pop-fiction, it’s going to take some doing for the reader NOT to be instantly suspicious of them, and I felt the gun was jumped on that revelation.

The issue has some pacing issues, jumping from very mellow dialog to massive, explosive action but not doing much in the way of compensation in terms of the dialog. The book remains just as wordy during the huge action set-piece as it was in the four walls of a boardroom.

All-New X-Factor is still delivering on the glorious promise of its concept: a corporate-sponsored team culled from both previous iterations of X-Factor and characters new to the roster, bringing with them all the baggage and personalities of previous issues. It still has some of the most evocative art on the shelf and an absolutely glorious sense of humor and fun to it, making it an easy recommendation. Any odd-numbered issue makes a fine jumping on point, so if you can’t find the first four, don’t worry about it. 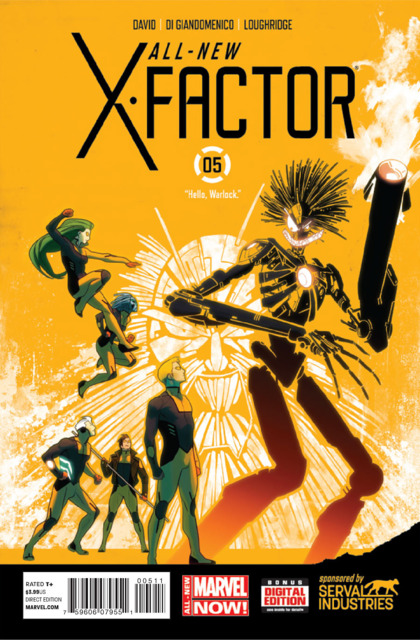