Wolverine and Spider-Gwen team up in an unexpected way.

We've seen superheroes from different backgrounds meet numerous times over the years. They usually follow the same formula. The heroes meet, they fight, realize they're on the same side, and team up to fight the common foe. The meeting between Wolverine and Spider-Gwen doesn't happen this way. They meet in an unexpected way--they somehow swap bodies.

One character ending up in the body of another isn't exactly a new concept. What makes this stand out is the execution. Tom Taylor, Marcio Takara, and Mat Lopes make it work in a brilliant fashion.

There's something refreshing about how the story plays out. We're currently in the middle of the Civil War II story arc and having this story, presumably, take place before allows a stand-alone feel. The addition of Gabby and Jonathan (an actual wolverine) is an added bonus. These are the sort of stories I want in an annual. Both Laura and Gwen have had a bit of darkness in their lives. This story isn't exactly a picnic in the park, but there is some moments of levity.

Takara's art is gorgeous. He nails both the action scenes and moments of silence. There's also his epic style of drawing hair. Hopefully we'll see more of Takara's art on future issues.

All-New Wolverine Annual #1 is my favorite book this week. We get a delightful meeting between Wolverine and Spider-Gwen. Taylor, Takara, and Lopes are on point with the story. The crux of the plot passes by a little quickly, and the resolution to tie up the self-contained story feels a little convenient. Regardless, it's an enjoyable issue. Even if you're unfamiliar with the characters, you can easily dive into the story. Do yourself a favor and buy the issue. Maybe you should even buy two issues to had off to a friend to try to convert them into reading comics. 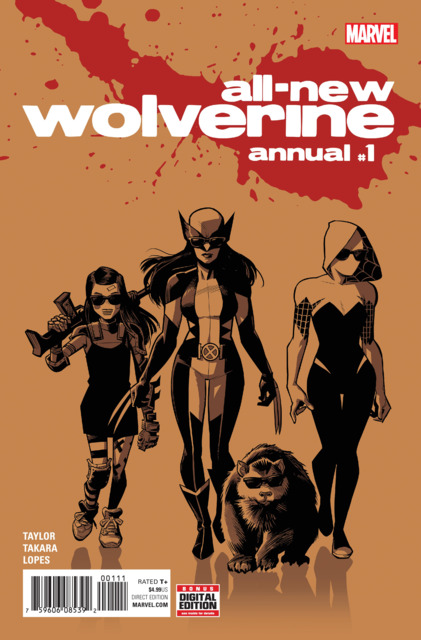