Laura is determined to protect the clones of her but Taskmaster has something to say about it.

It's been great seeing X-23 in her own title once again. Now that she's taken the mantle of Wolverine, she's determined to live up to Logan's memory and stick to her new code. She recently discovered that three clones of her were created by Alchemax Genetics and have been causing problems. Laura agreed to find them in the hopes she can put a stop to their actions before Alechmax's security kill them. It appeared she was about to succeed until Alechemax soldiers arrived along with Taskmaster.

One of the most anticipated moments in this issue was the idea of Wolverine and Taskmaster fighting each other. Taskmaster has the ability to to mimic anyone's fighting style and can adapt his during a fight. As great as it was seeing them here, the fight went by way too quickly. We know Wolverine is going to be written as an incredible and unpredictable fighter but the fight should have lasted longer than it did. Perhaps Taskmaster was caught off guard by the claw in her foot. Let's hope we see a rematch at some point.

Laura's decision to not simply kill her opponents adds another layer to her. We've see characters that kill too easily. It's more interesting to see one that has the ability to decimate their opponents but chooses to find other means to end a battle. Another character questions how Wolverine can be a pacifist but as Laura quickly points out, she has no problem beating and slicing her opponents to end a fight. Tom Taylor captures Laura's essence and struggle nicely. Despite her decision not to kill, you can see how easily she can intimidate others with just a look.

This is driven home with the art by David Lopez and David Navarrot. You can feel what Laura is going through simply by the look in her eyes. The brief fight looked great and I still marvel over how the different X-23 clones each looked unique with their own personalities despite being copies of Laura. The fight is taken to the streets and you have to love seeing a high speed car chase surrounded by big explosions. If you've seen the cover to the next issue, you know who Laura will meet up with next. It makes an interesting and unexpected pairing.

As X-23 takes on the mantle of Wolverine, we're seeing her grow as a character. Tom Taylor is putting her in charge of her own destiny. Wolverine is a serious and deadly character and it's fascinating to see her use violence but refuse to resort to simply killing her enemies. David Lopez and David Navarrot's art is great and they give us plenty of cool-looking scenes. The fight with Taskmaster and the car chase almost felt rushed. Maybe because I'm enjoying the series, I just wish the issue could have more pages to flesh these moments out further. ALL-NEW WOLVERINE has become one of my favorite titles under the All-New, All-Different Marvel banner. I just can't get enough of this book. 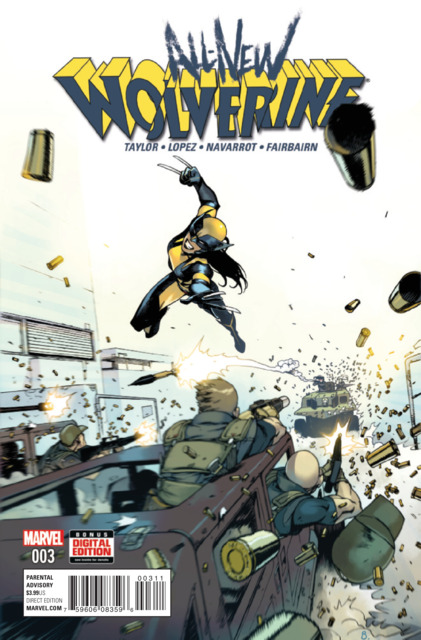