Laura has discovered there are assassins cloned from her. Can she save them? Should she?

Laura Kinney had quite the surprise when she stopped an assassin in Paris only to discover the killer couldn't feel pain and looked just like her. The deal is a scientist at Alchemax managed to acquire her DNA and created some clones. Besides not having her healing factor, they apparently don't have her conscience either. She allows herself to be taken to Alchemax to get some answers. They simply want their "property" back but she sees it as more complex of a situation than they make it out to be. The real question is, are these clones as much of a threat as Alchemax is making them out to be or should Laura try to save them?

Tom Taylor's take on Laura is a fascinating one. She's evolved a bit as she's taken on the Wolverine mantle. She's still in a relationship with (young) Angel but also feels the need to do some things on her own. It's great seeing her in action. There is a bit of maturity to her and you can see her embracing other aspects and traits of being Wolverine now.

I really dig the art by David Lopez and David Navarrot in this series. When Laura comes across her clones, it's more than just drawing X-23 a few times in the same panel. Each is clearly given their own personality and look. This is still the X-23 we've known and loved but you can see her becoming something more. There's just something to vibe of this book. Nathan Fairbairn's art adds to it as well.

The idea of Laura going after clones of herself is becoming more and more intriguing given the other layers of the story. With each page, I'm reminded how much I've missed X-23 on solo adventures. Despite her connection to the X-Men, there's a strong sense of her being on her own and in her own corner of the Marvel Universe. Although she might be hoping for some backup after what happens at the end of this issue.

Tom Taylor is taking X-23 to the next level. Laura has come a long way since she was first introduced in 2004. Having her take on the Wolverine mantle is allowing her to step up and you can see her outlook on things changing in a way. There's a great feel in the characterization in the art along with some cool action sequences. You'll love the nice twist and cliffhanger at the end and it'll will make you do a Darth Vader impression ("Nooooooooooooo!") when you discover you have to wait until the next issue to find out what's going to happen. I never thought I'd love X-23 as the Wolverine this much. Things are about to get pretty nuts. 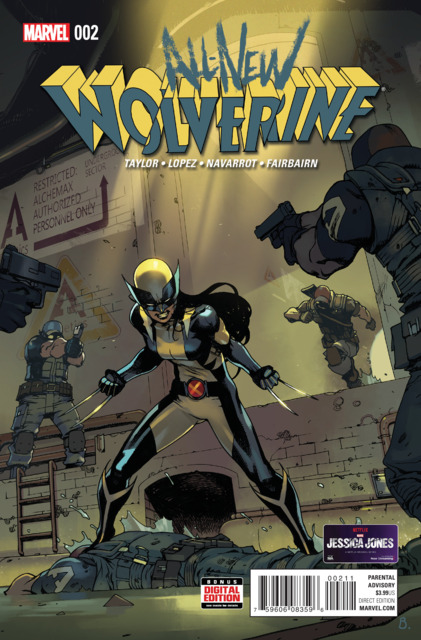