Get a look at what's coming up in several new titles in the Marvel Universe.

Have you ever gone to a restaurante and ordered a big sampler appetizer? That's how you can think about this issue. With the All-New Marvel Now! wave of titles, there are a lot of new titles and relaunched titles coming out way. This is a great way to get a taste of what's to come. Written and drawn by the upcoming creative teams, this is a nice way to decide on some titles if you've been on the fence with them. There's almost something for everyone.

It's easy to cringe at the $5.99 price tag and scoff at the idea of picking this up. What you need to consider is you get fifty pages of actual content by some great creators. In between the separate stories, there is a Loki tale by Al Ewing and Lee Garbett setting up the stage for LOKI, AGENT OF ASGARD. Then there's a ten page SILVER SURFER story by Dan Slott and Mike Allred. next is eight pages of what we can expect in ALL-NEW INVADERS by James Robinson and Steve Pugh. We already reviewed BLACK WIDOW #1 but you get another eight pages with a mini-mission by Nathan Edmondson and Phil Noto. If you're wondering about the new Ms. Marvel, there's an eight-page story by G. Willow Wilson and Adrian Alphona. The last main story is an eight-page Avengers story by Nick Spencer and Rags Morales that tweaks the direction of the team a little.

As you can see, it's a smorgasbord of comic content.

Obviously there's going to be a wide mix of stories. The Loki pages in between the other stories helps to bring a little unification to the overall book. With all the different creators as well, the different stories can be hit or miss. Some really work as a great representation in this bite-size formats. Some will leave you scratching your head a little. For example, I've stated my excitement over Dan Slott and Mike Allred's SILVER SURFER. The story here is not an introductory one. You'll have no idea why Silver Surfer is hanging out a female Earthling. You can pretty much say the same for some of the other stories, like the BLACK WIDOW one. These two stories are great but they'll just throw you right in. Which isn't too bad of a thing.

A couple of the other stories actually put me more on the fence than before.

If you're looking for a lot of comic for your money, this is a title you'll want to check out. With the many All-New Marvel Now! titles coming out, this will give you a good idea what you can expect with some. The $5.99 is more than you might be used to paying for a single comic but we are talking fifty pages of fresh new content. With so many different stories by a lot of creators, there's bound to be plenty for you to enjoy. Get on board now to find some of your new favorite comics coming out soon. 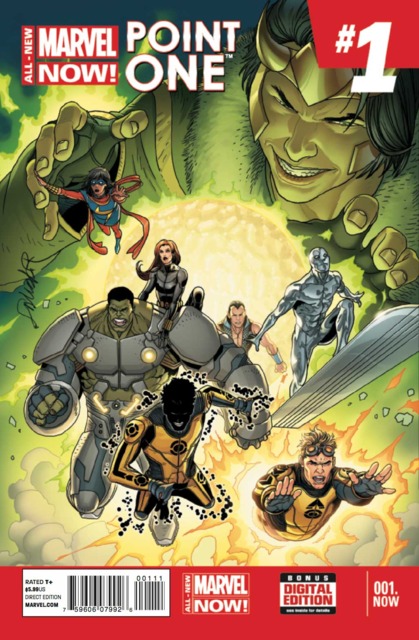