Namor is alone against the Kree. They better call in some back up.

James Robinson writing Namor. If this issue doesn't bring a smile to your face, I'm not sure what will. Namor can be a complex character. Yes, he's full of arrogance and tends to jump right into a fight. But there's more than just having him shout "Imperius Rex." Robinson gets that. He grabs onto Namor's personality and shoves it in your face. No matter the odds, Namor perseveres. It's great to see the portrayal of his personality and arrogance remain a constant, no matter what odds he faces.

We're starting to see the Invaders all together now. You can feel the anticipation growing as we wait for them all to dive into the action. More is revealed about "The Gods' Whisper" and it looks like the team might be more than ready to take on the Kree. The addition of Aarkus will definitely make things interesting in a way I didn't even expect. Can't wait to see how this plays out. I've mentioned it before but having the Invaders face off against the Kree was unexpected and who knows what will happen next.

Steve Pugh is a busy guy in this issue. Besides the multiple characters involved to draw, we also see the story venture off into different locations. I'm always in awe when you get to see an artist draw several different characters in different scenes while retaining consistency, especially when you have a scene with two blonde-haired guys.

This isn't necessarily a gripe with this series but I've found it odd odd that Bucky is supposed to be dead to the world since he's wanted by the World Courts. Since his death and decision to revert back to his Winter Soldier look, it feels so odd that he simply wears a little domino mask while sporting a big metallic arm with that trademark star. I love the Winter Soldier look but you would think wearing a mask or covering the arm might me useful.

As far as the Invaders go here, they discover a bit of a loop hole in the Kree's scheme but fail to think about a certain other aspect that comes into play. Given the state of the Marvel Universe and these sort of denizens, it was something that immediately came to mind but was something they, Captain America included, didn't think about. 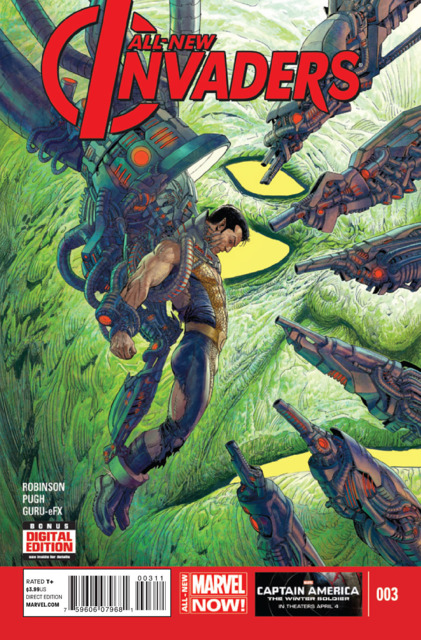