Why are the Invaders getting back together? Find out in this issue.

It almost seems like a crazy idea for Captain America, Bucky/Winter Soldier, Namor and Jim Hammond/Human Torch to get back together. Of course, James Robinson comes up with a reason why.

The Invaders always felt like an old concept. We've seen past attempts to revive the idea but it never really seemed to work. If you read the recent Marvel POINT ONE issue, you know there's a new threat on the board by the name of Tanalth. She's a Kree warrior that Cap and company will not want to mess with. But we know they won't have a choice.

In this issue we find out what Jim Hammond's been up to. He's always been a fascinating character that's been underused. Seeing how he and the others are connected in this current "mission" is an interesting idea and makes sense that it's never been brought up before.

Steve Pugh's art is cool to see. I never imagined I'd see Jim Hammond in action like this. We get to see a lot of fire and Guru-eFX goes all out in bringing it to life.

The gang's not all here but it's a nice set up for what's to come.

The reason we don't know about this past connection they all have might be a little convenient. But realistically, it is a good way to fit it into the characters' backstories.

Jim Hammond seemed a little out of character. I can't really remember the last time I saw him and he's gone through some stuff before. He seemed a little careless during his battle. He's seen quite a bit of action and knows the dangers his powers can cause to his surroundings. But perhaps he was caught off guard with what happened right before the fight started.

The Invaders are back and only James Robinson could have pulled it off. With Steve Pugh on art and Guru-eFX on colors, it's a good beginning for the new series. Robinson sets up the scenario for the characters to get back together. The threat bringing them together is not what you'd expect and that's what adds an interesting twist. We'll definitely be keeping an eye on this series to see what happens next. 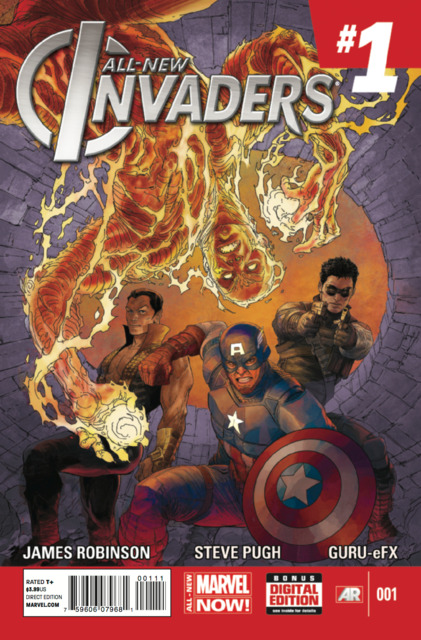