It's time for some Team Hawkeye action mixed in with a look at Clint's younger days.

There's a new Hawkeye series headed your way. We all enjoyed the previous volume and were sad to hear it was coming to an end. We can be content in knowing we have an amazing new volume to fill in our Hawkeye needs. Jeff Lemire dives right in and takes the reigns with ease. Some may have had concern over a change in tone or direction but I'll just straight out say it now, I loved this issue.

For a book with just "HAWKEYE" in the title, we do have other characters that have gone by that name. Along with Clint Barton, we also have the (thankful) return of Kate Bishop. We get some beautiful flashback scenes with Clint's brother, Barney, as well. In some ways it's like we're getting two books in one. The action in the present with Clint and Kate gives us some big fun action as they go up against a horde of HYDRA agents. Lemire has perfectly captured their voices and characteristics while also making it his storytelling. It's not just simple fun since they're in a pretty dangerous situation and Clint's known for getting in over his head.

With the book opening with the flashback part, we get to see more on the relationship between Clint and Barney. As you may be aware, they did not have the best childhood. Despite Ramón Pérez handling the art for the entire issue, we have colors by Pérez and Ian Herring. There's obviously a noticeable difference but both parts look fantastic. I've mentioned before how changes in art in a single issue usually causes a distraction but it's a welcomed difference here between the past and the present.

There's nothing bad in this issue. I'm sure some will note the fact that this issue has come out before the previous volume's last issue has. That's an unfortunate thing but clearly has nothing to do with this issue and shouldn't be dwelled upon.

If you're a fan of (almost) anyone named Hawkeye, you're going to love ALL-NEW HAWKEYE. Jeff Lemire and Ramón Pérez have given us an amazing first issue issue for the new volume. If any Hawkeye fans were concerned with the new creative team taking over, they can put those away and put on their dancing shoes to celebrate the new series. While the main story focuses on Clint and Kate in the middle of a crazy plan, we are also treated to some gorgeous flashbacks with Clint and his brother, Barney. The color is split between Pérez and Ian Herring and it's definitely impressive. This series will give you an all-new reason to fall in love with Hawkeye once again. 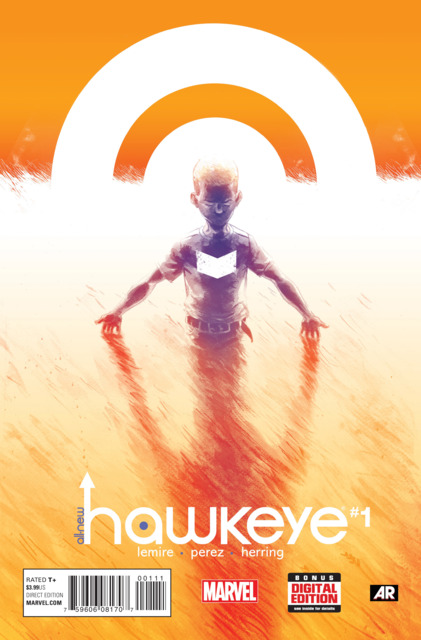