Baron Zemo’s horrific plan ticks closer to becoming reality as Captain America, along with Misty Knight, race to throw a wrench into the gears.

There was a seismic shift when Marvel Comics decided to bestow Sam Wilson with the title of Captain America, following Steve Rogers’ depowering. Not just because of the questions about race that it raised, but because Wilson is an entirely different person with an entirely different power set. Which is why it was a great decision for Rick Remender to not just give him the shield, but to fundamentally alter the suit to take advantage of his different skillset. And like all good Marvel renumberings/recastings, Sam’s been chucked into the very deepest end of the pool and told to drown less. Baron Zemo’s unleashed his most Nazi plan in a very long time to sterilize the “undesirables” of the world (meaning anyone who doesn’t have his cure) and win in such a subtle way that it would go unnoticed until it may be too late. After dealing with his past, as well as Sin, Cap is ready to step up and go toe-to-toe with one of Cap’s most vicious enemies. Remender does a great job writing set pieces that easily have a real sense of pacing within themselves with a real sense of fluidity, which sets a great tone and pace for this issue overall. Cap was always about fluidity and seamless transitions in combat so making that the crux of how this combat-heavy issue moves makes it read amazingly well. He also gives us glimpses at plenty of similarities and differences between Wilson and Rogers, another critical part of making this a compelling tale and not just the publicity stunt it gets accused of being.

Stuart Immonen handles pencils and does an absolutely phenomenal job of blocking and panel control. It’s always easy to tell where everyone is in relation to one another and it keeps the fight moving with a brisk, exciting flow. The characters, from top-to-bottom look fantastic, and Immonen knows how to use body language to say so much that the characters would be clear even without dialog. Wade Von Grawbadger handles inks and does a fantastic job at bringing a sense of weight and even realness to the otherwise cartoony visuals. Immonen’s visuals tend to the fantastical, and that’s to their benefit, but with a story like this strong, defining inks can help to keep a sense of realism and impact. Marte Gracia handles the colors and gives the whole book a dark, shadow-soaked tone that does justice to the frankly appalling ploy by Zemo. This is a surprisingly dark book, but it never becomes dreary and the palette also helps Cap shine like the beacon in the dark that he is.

While the set pieces are well blocked and well-paced within themselves, the transition from one to the next can be confusing, and it can be a little tough to keep track of who is where at what time.

There’s a great cliffhanger to end the issue, leaving the audience champing at the bit for the next issue and establishing that Remender and Immonen know exactly what they’re doing and were a great choice for creative team on this title. This issue helps to justify and define what kind of Cap that Wilson will be, and the fact that it NEEDS justifying isn’t great, but here we are. This book is so much greater than an attention grab and deserves to be read. 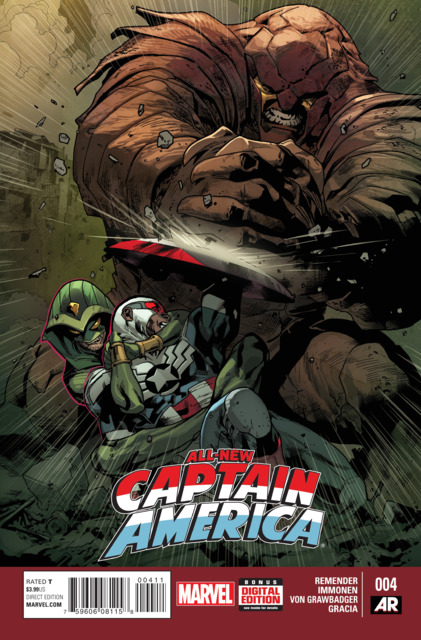