There's a new Captain America. He's not really new since most of already know Falcon. But find out if he can throw the shield like a boss.

Every now and then we see a big change in the status quo of popular comic book characters. Some love them and others frown upon them. But for a comic book universe that hasn't really rebooted the characters' history, mixing things up and changing characters around can make for some interesting stories. Rick Remender often plans things out for the long haul so it's going to be interesting to see how this story goes.

The idea of someone replacing Steve Rogers as Captain America isn't new either. What is fascinating about it is seeing how Sam Wilson, formerly Falcon, will take to the role. For a first mission, Sam is taking on a HYDRA base. Cap fans will be happy to know Steve is still involved by providing intel to Sam during missions. Sam also won't be fighting alone as it seems he'll be partnering with the new Nomad as well.

Stuart Immonen's art is a welcomed treat. With each issue he draws, I love his art more and more. Having him draw the adventures of Falcon as Captain America (with inks by Wade Von Grawbadger) is fantastic. I was ready to ask why would Falcon need a shield when he's operated for years without one. Seeing the way Immonen draws the action, that clearly requires a shield, more than answered the question. As for the other question, can Sam throw the shield with expertise? For the most part, yes.

I'm a big fan of Captain America. I've been reading his stories for decades. It can be hard to embrace a different character taking up the mantle. At the same time, because I have been reading for so long, it's easy to accept Steve will eventually, somehow, return to the role.

There's a minuscule amount of confusion as we're seeing Sam under the influence of the Inversion spell in AVENGERS & X-MEN: AXIS. This has caused some changes to his personality but thankfully he appears to be okay here.

I kind of would have liked seeing Sam actual practice using the shield but I suppose others might see that as a little dry.

Change happens all the time in comics and we are seeing a new Captain America once again. Sam Wilson is not a new character but he does bring some new ideas to the role of Cap. Rick Remender gets to play around with the new status quo and we can already see we're in for a treat with this new fighting duo. Stuart Immonen's art is a great as you would expect. The action scenes are superb and wait until you see the last page. It might be hard for some to accept change but we all know these sort of changes have a way of circling back eventually. What readers need to do is embrace the change and strap in for the ride. You never know what Rick Remender is cooking up and you won't want to miss out on the fun. 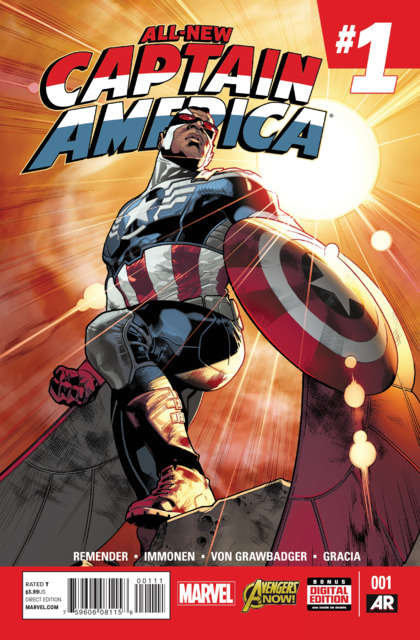