The team has been formed. They have new headquarters. Are they ready for a new mission?

We've seen so many different incarnations of the Avengers over the years. The rosters have constantly changed along with their base of operations. Despite all the changes over the years, there's always been a common feeling to the book regardless of the changes. This current team is pretty different from anything we've seen in an Avengers book before.

Mark Waid has finally put together his non-traditional team. While there are some some familiar aspects like Iron Man with versions of Captain America and Thor, it's a new era for the team. Sam Wilson is an experienced hero from his years as Falcon, but he's still getting used to the role of Captain America. The new Thor has been building up her experience, but she's still a huge mystery to the rest of the team. Vision is a veteran member, but clearly there's something more going on with him. The rest of the team is filled with newer and younger members. Sam Alexander, Kamala Khan, and Miles Morales have each shown us they are more than capable of holding their own and doing great things. It's just not too common to see younger and less experienced heroes, let alone three, given a spot on the team.

That's what makes this so intriguing.

As mentioned, we've seen a lot of different variations with the team roster. Waid is giving us a different and more scrappy version. They finally have a new headquarters, but without a mountain of money or government support, the team will have rely on other means to get the job done. The addition of Jarvis is interesting, and even he has some doubts about how the team will operate. We've seen the perfect teams over and over. They've always has the luxury of a high-tech headquarter with numerous quinjets, fancy communication gadgets, and state of the art training areas. This team will need to focus on their strengths as heroes in order to work together to complete each mission.

That's another aspect Waid is exploring. The team may be officially formed, but they'll need to work on their actual teamwork techniques. Most of these heroes are used to working on their owns. They know what they're capable of doing and will have to learn to rely on the others and to watch each other's backs.

Mahmud Asrar is no stranger to team books these days. He handles big roster with ease and excels at popping in expressive looks that truly conveys the emotion of each character. Seeing Jarvis' disdain for the new headquarters or Ms. Marvel getting creeped out by Vision was fantastic. When it comes time for action, we see all the different members doing their part and the action has a very fluid feel to it.

As entertaining as it is to see this new and different team try to figure out how they'll operate, it will take some getting used to. They've had a couple missions so far and there's been a slightly strange feeling at the resolution of each. They're supposed to be the Avengers. It'll be interesting to see the team fully come together since they're already doing good things. The other concern was the big kiss seen on the cover. The reason is explained. It partly felt as if it was mainly to stir up reactions. This is another thing we'll have to wait to see if it's further explored or just a one-off event.

You've probably read a mountain of Avengers comics, but you haven't read ones like this. Mark Waid is embracing the "All-New, All-Different" title and giving us a team that's very different from what we've seen before. There's a bit of a learning curve despite all the heroes having plenty of experience on their own. This different vibe to the team does separate it from past volumes and adds an air of mystery to the series. We're used to the team being able to seamlessly take on any problems. That's not the case here and it's part of what makes it feel fresh. Mahmud Asrar's art is refreshing as well. His art keeps getting better and better as he handles the solitary character moments along with the heavy times of action. Forget what you knew about the Avengers before. This is a new team for a new age. 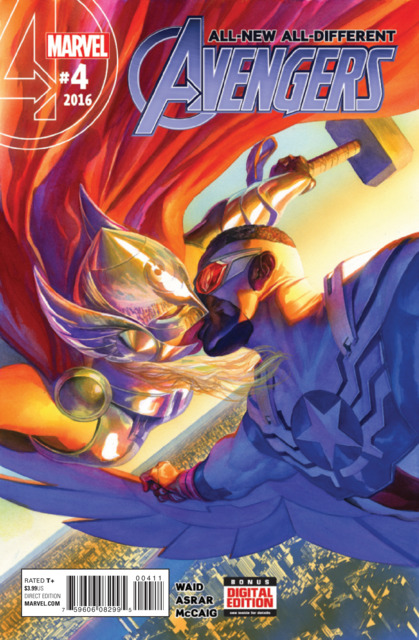