Point of no return time. Warranties voided. Let's get sentient.

ALEX + ADA evokes an almost-sterility; a near-future that is so clean and controlled that it borders on dystopic, but with a healthy enough pulse of humanity and rebellion that it isn't abjectly terrifying. The narrative pace is extremely deliberate, with the story parsed out in a series of modules -- it's uncannily structured, and despite its seemingly-slow pace, each issue's end begs for the start of the next one.

I'm drawn to the series for the same reason that I enjoy concepts like Her; it occupies that space that's not so far from reality as to be unrelatable, but not so real as to be mundane. ALEX + ADA walks the border of the Uncanny Valley, but isn't there just yet, and both the high concept and the execution are thoughtful and fresh.

Especially interesting is the blurring of lines between human and robot that occurs more deeply as the series goes on; the little blue lights at human temples that indicate the presence of an implant make the contrast between characters like Alex and his un-named co-conspirator less clear. It's possible that the hoodie-clad sentient robot has a more interesting personality and existence than Alex himself -- so far, an affinity for cheesesteaks, a deep bond with other droids, a range of exhibited emotions, and a passion for the sentience cause are points in favor of the anonymous bot (especially in comparison to the bummed-out Alex, whose defining traits aside from his interest in awakening Ada are a meddling grandmother and a hang-up for his nondescript ex). Reason to wonder what Ada is like? Right there.

There's a quality to the illustration that feels a little bit flat sometimes -- I think it's the sparse detail of the interior environments -- and that flatness is exacerbated in an issue like this one that is substantially set in a virtual room. Humans (and robots) are rounded out and occasionally asymmetrical, and exterior scenes feature plants and sunsets and the like, but the starkness of indoor/virtual settings is a little bit stronger than I'd like, even for an ultra-sanitized, possibly-dystopian future.

ALEX + ADA has been drawing out its narrative carefully, leaving a tease of a mystery with every issue. It's worth it; the just-ahead-of-now future is almost palpable, and the story is incredibly easy to invest in. Who is Ada? What is she like as a sentient robot? Is she likable, or terrible? Curiosity: piqued. ALEX + ADA: added to pull list. 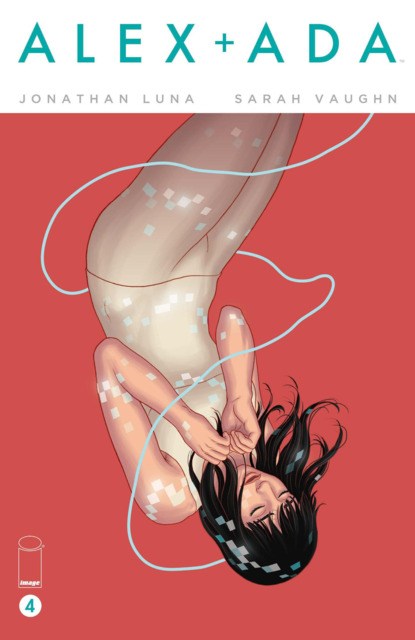