The new semi-autobiographical series will change the way you look at pretty much everything.

This is a comic we've heard about for a little while. James Robinson tells a semi-autobiographical tale from his life and the creation of this comic. James has shared some tidbits with his personal life via social media in the past. This series is sort of an offshoot of that. Needless to say, be prepared, be very prepared, to see James in ways you never thought or dreamed of.

That's right, James Robinson actually appears on the comic. It tells the story of him at a bit of a lowpoint in his career and life and the suggestion comes to write a new series based on the public domain character, Airboy. Soon James brings in an artist, Greg Hinkle, to help kickstart some brainstorming ideas. The actual results consist of a drug and alcohol journey through the crevices of San Francisco.

James really puts himself out there in this series. Despite the sometimes serious and dreary vibe going on, there are also plenty of shocking and humorous moments. Simply put, this is a comic unlike any you've seen before. You won't be prepared for what you'll see here. The first page is a bit of an eye-opener and even that won't prepare you for what's to come.

There is a lot to set up in this series. From the announcement and interviews, it's been revealed that while James and Greg embark on this creative journey, they somehow cross over with the actual Airboy character from the comics. As if the story wasn't weird enough in some ways, this is kind of the least of the surprises. There is some raw emotion poured into the script and art.

Hinkle's art is pretty phenomenal. There's a great vibe going on with the style and subdued coloring. This is further emphasized as a certain element comes into the story towards the end. You'll definitely want to stop and take in all the details in each panel (well...maybe not all the details). There's so much going on jam-packed on each page. Hinkle does not skimp on the background details. Just be prepared to see everything you're going to see.

It's obvious there may be some a little put off by the language, nudity and drug usage. It's just a part of the story and set up. This isn't a comic you'll be reading around the kids. If you're offended by things like this, you can likely find other books to read. For others, this will be an incredible look at a very strange journey. Not all comics need to be for everyone.

This issue also has the big role in setting up the entire series, and there's a bit to set up. Once you reach the end, pretty much all the pieces are in place, setting the stage in a big way for the next issue.

If you've read any comic from James Robinson in the past, that likely won't even prepare you for this book. Robinson lets it all out (literally) and tells the semi-autobiographical story of a low point in his life. Packed with raw emotions and a heaping serving of profanity, nudity, and drug usage, this is a comic pretty much unlike any you've seen. There will be moments that will shock you as well as ones that will make you laugh. Greg Hinkle's art is brilliant. A fantastic look at James' world is being set up in this issue. You will see things you never thought you'd see. There are some bold and gutsy things being done here. You'll be entertained in way most comics can't. This is a different sort of comic and that's a great thing to have on the store shelves. 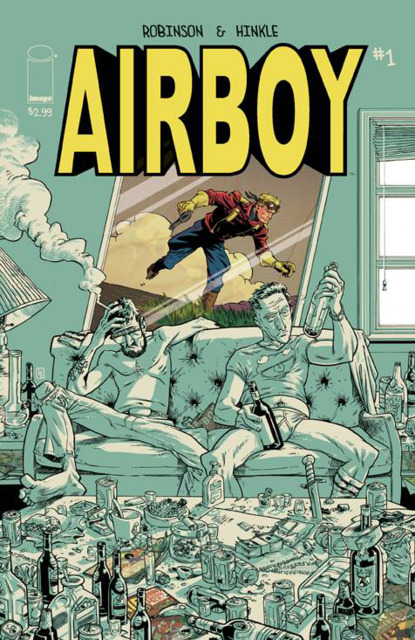