Luke Cage and She-Hulk attempt to discover Ultron's plan while the others head to the Savage Land.

If there's one positive thing you can say consistently about AGE OF ULTRON, it's that the devastated cities look good and, as usual, there's plenty of that. Illustrator Bryan Hitch once again shines when it comes to mass destruction, giving us good glimpses of what this destroyed and cold version of Chicago and New York looks like. It opens with a huge action sequence and, despite personal gripes, it looks good when you're thrown into the mix and right there with the hits. When you take a step back, though... well, that's a whole different stroy and you'll see what I think about that in 'The Bad.'

Up until last issue's cliffhanger, this book's overall plot has been moving slower than a sloth. It has been mostly destroyed locations, hero banter and some action sprinkled on top. Issue #4 finally changes that, and, while I'm not a fan of a few plot points, it is nice to finally have the narrative no longer taking baby steps and instead making huge changes. Also, we see the return of Black Widow and Moon Knight, and seeing as they're sporting Nick Fury's back up plans, they're sure to be a key part and I can't help but love that.

Bryan Hitch has done some absolutely spectacular work, but the quality in this issue jumps all over the place. There's some solid panels of destroyed cities and Ultrons taking a first to the face, but overall there's way too many pages with stiff positions and a complete lack of detail. At one point, Luke Cage being tossed out of a building is literally represented by an all brown figure with zero detail. If it isn't a close up that involves characters or a landscape, odds are attention to detail is going to take a massive hit. Additionally, there's a pretty cool moment between with Taskmaster and Rulk that feels like a missed opportunity. There's way too much blurring effect and it doesn't pack a punch (for a lack of better words) like it should. Instead, it makes me think of his work in THE ULTIMATES and makes me wish it was more like the jaw dropping strike between Hulk and Abomination. As for why Rulk did that, it's understandable given he knows Ultrons "trade in a hero!" plan.

Look, I get writer Brian Michael Bendis likes Luke Cage and he is indeed a tough cookie, but this is crazy. The man is durable, but that durable? I understand he had the desire to inform his friends, but a strong desire shouldn't slap logic in the face. The blast alone should have killed him (remember that time he was hospitalized by a way smaller blast in Bendis' SECRET WAR?), but then he escapes, gets a vehicle, crashes in the Savage Land and crawls to Ka-Zar's village? With characters being killed off like they're nothing (Black Panther took a bad tumble, She-Hulk gets laser q-tiped) for example), having Cage endure all of this was just way too unbelievable for me. And yes, I realize how absurd that sounds while talking about the ridiculousness we see all the time in the medium, but I'm a dude that puts a strong emphasis on the power levels consistently established for these characters.

There's a huge twist revealed for Ultron and it's basically cast aside with "yeah, that makes sense!" Seeing as I'm not an expert when it comes to Vision or Ultron, it doesn't make perfect sense to me and -- I can't believe I'm saying this -- but some exposition would have been greatly appreciated. A wee bit of technobabble would have been beneficial for me there. Time travel is never exactly the most simplistic thing around, after all.

The concept of everyone meeting the Savage Land seems like too big of a coincidence to me. As of right now, it's only fully understandable why Natasha and Marc are there. The rest? Not so much. Shame on me for not calling this out in the last issue, but why would they meet all the way down there when they're all the way up in the Big Apple? They hardly know what's going on in the world around them, so how does traveling such a great distance seem like a good choice? Yes, there's resources there, but they don't suspect other locations have some resources as well? Captain America really doesn't have any other places in mind? I'm just going to assume there's a logical reason why Rulk decided to meet there, so I'll give that the benefit of the doubt until the next issue.

Finally, Iron Man says he's never seen a nuke before and that's not true. Not only has he seen a nuke, he's been hit by one and survived. Minor point, of course.

Incredibly mixed artwork and way too many moments that made me scratch my head weighed down this issue. That said, I am glad the story is finally taking huge steps -- I just wish said steps were going in a different direction. Bendis does indeed have plenty of excellent work on his resume, so I have to assume this next chapter will be dedicated to making sense of all of this. Why is Rulk there? How is Ultron communicating from the future? What plan will Marc and Natasha reveal? I really hope these are the topics that take up the core of the next issue and not more landscapes -- they look solid, but we've been given more than our fair share by now. 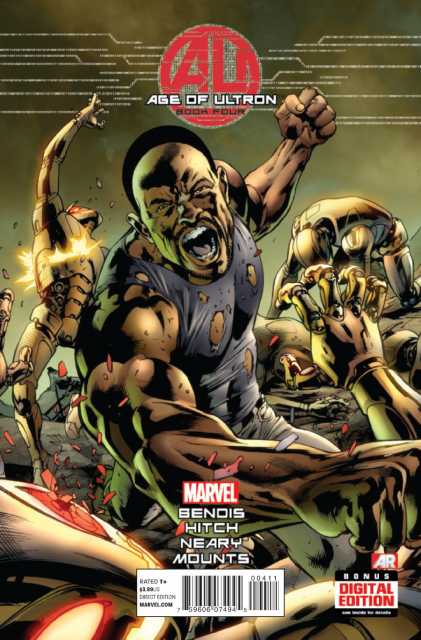