It's the end of "Escape from Riverdale." The question is, who will escape with their lives?

Roberto Aguirre-Sacasa continues to flesh out the existing characters we know in Riverdale. Often perceived as simple characters with no depth, we see that there is more to these Archie characters than we realized. Aguirre-Sacasa takes Smithers, the butler at the Lodge mansion, and puts him in the position of chronicling the last moments in the end of the first arc. As a sort of outsider who is actually more attuned to what's going on, we see his analysis of the survivors hiding out at the mansion. These moments of observation allows us to see where the different characters are and what they're feeling during this horrific time. All the while, we get to glimpse deeper into who they are as their guards are let down.

As Smithers observes and makes note of everyone, you can start to see how the next chapter of this story could play out. With each moment of grief or survival, we see what the characters are made of and what they are capable of. This could be an indication of who will or won't survive. Then again, you really can't be too sure who will survive.

Despite the safety of Hiram Lodge's mansion/fortress, the fact remains that they can't stay there forever. Somehow they will need to figure out how to get out and where a safer place might be.

Francesco Francavilla's art, as always, captures the mood and essence of the story. With his added style, even though we know these are the familiar Archie characters, you feel these characters growing into new ones. Aguirre-Sacasa and Francavilla have pretty much created their own Archie alternate reality and this series continues to be a book anyone can enjoy--anyone except for the children, of course.

With the end of the first arc, there have only been a few big moments of zombie interaction. Of course we can't and wouldn't want to see the characters fighting against them non-stop all the time. The character development has been great but this issue felt more like it was setting up the next arc and putting the pieces in place rather than marking the end of a story arc. There are some developments in this issue, for sure. We'll be waiting to see how these different ones play out.

It's the end of the first story arc and thankfully we still have some of the beloved Archie characters around. It's no surprise why so many people are talking about and enjoying this series. Roberto Aguirre-Sacasa is brilliantly laying out the groundwork for this ongoing series. Francesco Francavilla's art manages to keep the characters separate enough from the all-ages familiar Archie look but not so much that you can't tell who everyone is. His style also captures the dark and dreary mood of the story. You can see and feel the hopelessness some of the characters are feeling. This issue marks the end of the first arc but feels more like a set up for the next issue. We don't get too much closure and because this is ongoing, you wouldn't really want too much of that. If you haven't been reading this, you need to fix that right away. 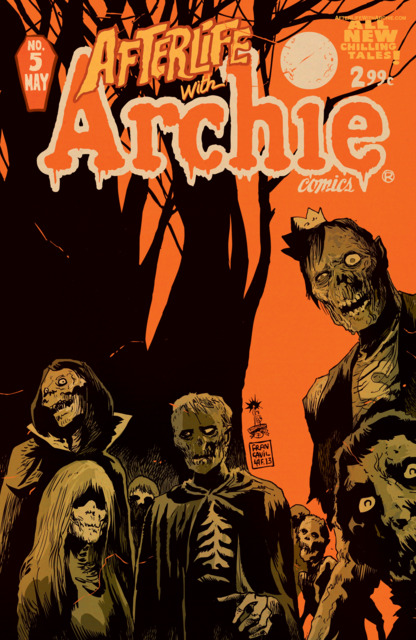