The series that that almost makes you feel bad for reading it continues. You just can't look away as you become absorbed by the chaos.

With each issue of AFTERLIFE WITH ARCHIE, I let out a big sigh at before and after reading the issue. These are the beloved and innocent Archie characters stuck in a horrifying zombie apocalypse. Roberto Aguirre-Sacasa is pushing the envelope with the series by cramming in so much action, emotion, and despair. Despite what some may think, this isn't simply zombies in Riverdale. We get to see these characters in ways we haven't before. There is plenty of character development as we get glimpses into the past of some characters. This adds to the emotion when you see the death of characters occur.

That's another unexpected thing about the series. It's a given assumption that our main characters have to be safe, right? That's been proven false from the very beginning. You still get that slightly sick feeling in the pit of your stomach as you're not sure if things can get any better.

Francesco Francavilla expertly captures the full essence of the story in his art. The gloomy scenes are straight out of a nightmare. Walking through the darkened halls seen here is the last place you'd want to be. The reaction and emotion on the characters' faces when forced to make difficult decisions is amazingly depicted.

The only bad thing about this comic is how bad you feel for the characters.

Roberto Aguirre-Sacasa and Francesco Francavilla are making something unforgettable with AFTERLIFE WITH ARCHIE. This is far from a gimmick. It's not just another zombie story. It's not even just another Archie story either. The seemingly innocent characters we all know, whether you've ever read an Archie comic or not, are being transformed to another level. Aguirre-Sacasa is making careful effort to develop these characters in a way that will open your eyes. You can see where they're coming from and the horrible situation they now are in. Fracavilla's art is both beautiful and disturbing at the same time. There is such a sense of dread and trepidation that really puts this comic over the top.

The stuff with Vegas was pretty heartfelt. Sacasa did a great job with the flashbacks to make sure there was genuine emotion there. Looks like the remaining Riverdale gang are in for trouble next issue. Looking forward to seeing how this goes down.

@longbowhunter: I completely agree.. I have a dog and i thought of my dog when i read the part with Vegas... ]'=

Vegas scene definitely got to me. It's a crime waiting another month to read the next issue.

Very strong issue! I had to put the book down a couple of times while reading it. Such an emotional ride!

Probably my second favourite series from 2013-14, they hit the ball out of the park with this. 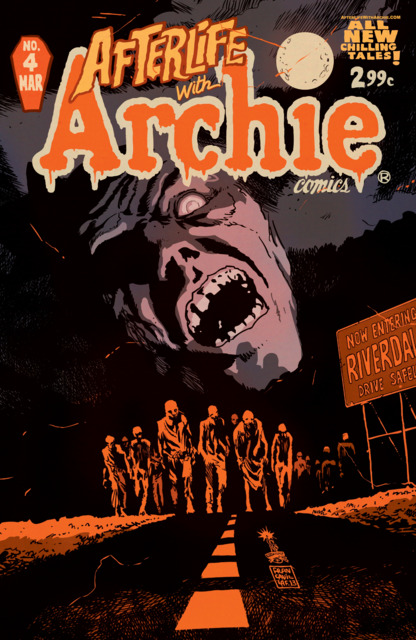