Superman is grounded and everyone knows he is Clark Kent. Where does he go from here?

Greg Pak and Aaron Kuder are delivering some awesomeness here. Keeping in line with what happened before the CONVERGENCE break, Superman's powers aren't gone but they aren't what they used to be and now everyone knows Clark Kent is Superman thanks to an article written about him by Lois Lane. Essentially, everything about this book has changed, keeping in tone with what's already happened.

Superman is basically a street-level hero now. His strength isn't what it used to be, but he still is super-human. He can't fly, so he gets around by either jumping or riding around on a motorcycle. The question isn't "is Superman on a motorcycle awesome?" It's "how awesome is that?" The answer is "very."

Right off the bat, we get a street-level fight which shows the reader where Superman is at, powerwise: just strong enough to win a fight with five jerks who want to make a point. However, they still get a few hits in. Greg Pak and Aaron Kuder do a good job at making this issue about informing the read where Superman is at without making is blatant.

We do get a good idea where this is all going by the end of the issue and it looks like Superman's antagonist here will be one bad police officer who blames Superman for all that's wrong in the world. Superman addresses this upon his first meeting with the officer and why Superman is hated by some. It makes a lot of sense and is a cool approach to this story.

Aaron Kuder, along with Tomeu Morey and Hi-Fi on colors, has done some amazing things on ACTION COMICS since he jumped on. What Kuder does insanely well is establishing shots. He puts a ton of detail into these pieces and creates some wondferful, iconic scene, like Superman riding a motorcycle. I'm seriously obsessed with that. Kuder is the type of artist where every panel feels like it could be a poster.

This isn't the Superman that fans will want to see. However, Pak and Kuder have proven they know what they're doing with this character, so while this may not be some fans cup of tea, right off the bat, give it a chance because what makes this a solid book is that we get to see this character in a whole new light and the challenges he'll face. However, the issue, as a whole, can be seen as a pretty slow start for the overall story.

There was also one moment where the inking got super-heavy and didn't match the lighting in the rest of the scene. However, that's the only problematic part with this book.

While the Superman t-shirt is cool, the "Eat Your Greens" shirt he had on in the beginning was so much cooler.

Superman is in a very different place right now, and while Superman fans may have trouble transitioning into this story, Greg Pak and Aaron Kuder know what they're doing. We're seeing Superman challenged by things that normally wouldn't be a challenge to him and that is what makes the debut issue of "Truth" exciting. I can totally get down on a story or two about Superman being a street-level hero. The only problems with this book were minor and had to do with a scene or two of art towards the end of the book, but aside from that, this is a great start to the new storyline. 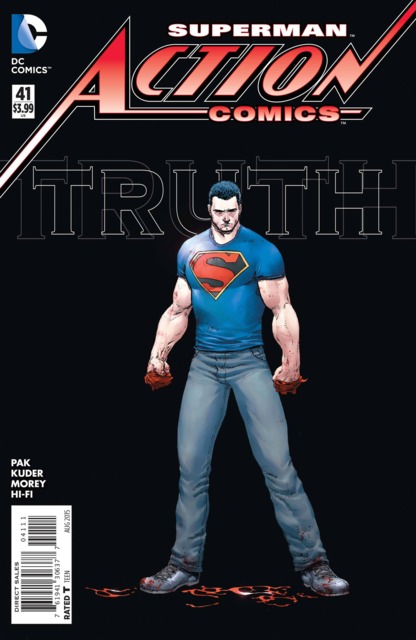